We arrived early in Bozeman, and by the time we had rented the car and were pulling out of the airport parking lot it was only 10:30 in the morning.  As part of the plan, we stopped at the Walmart in Bozeman and purchased various things we felt we might need for the week, water, snacks, bear spray, etc.  While these things are available in the park at general stores in several locations it was cheaper, and given the time of year, we weren’t sure exactly what would be open. We grabbed lunch and were on the highway by 11:30 heading for Yellowstone. It’s a little over an hour’s drive through the pretty country along the Yellowstone River from Bozeman to Gardiner at the north entrance to the park. Along the drive, we saw several herds of elk with large bulls as well as a Bald Eagle perched in a tree along the river.  In no time at all, we were entering the park through the north entrance and the Roosevelt Arch. We quickly paid our entrance fee and headed for Mammoth Hot Springs. 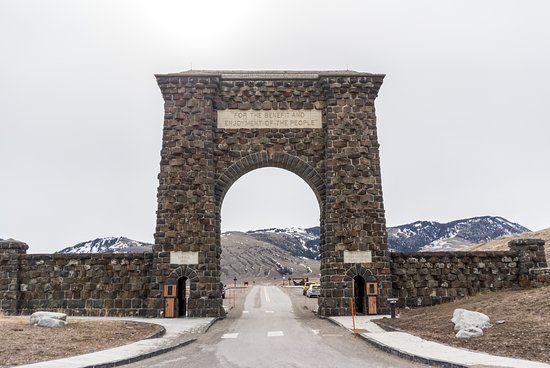 Once inside the park, I took a moment to unpack and set up a camera. Opportunities to photograph wildlife may present themselves at any time in the park. It pays to have a camera with you and ready at all times.  I chose my D500 with a 70-200 2.8 zoom. Everyone should be aware that the maximum speed limit in the park is 45 mph, so although distances on the map seem short, 18-21 miles on average, getting from place to place can take some time. Cars stopping for “animal jams” are not uncommon and can make things even slower. The drive from the north entrance to Canyon Village through Mammoth to Tower Junction and over mount Washburn and Dunraven pass took about 2.5 hours. We saw a number of animals along the way. 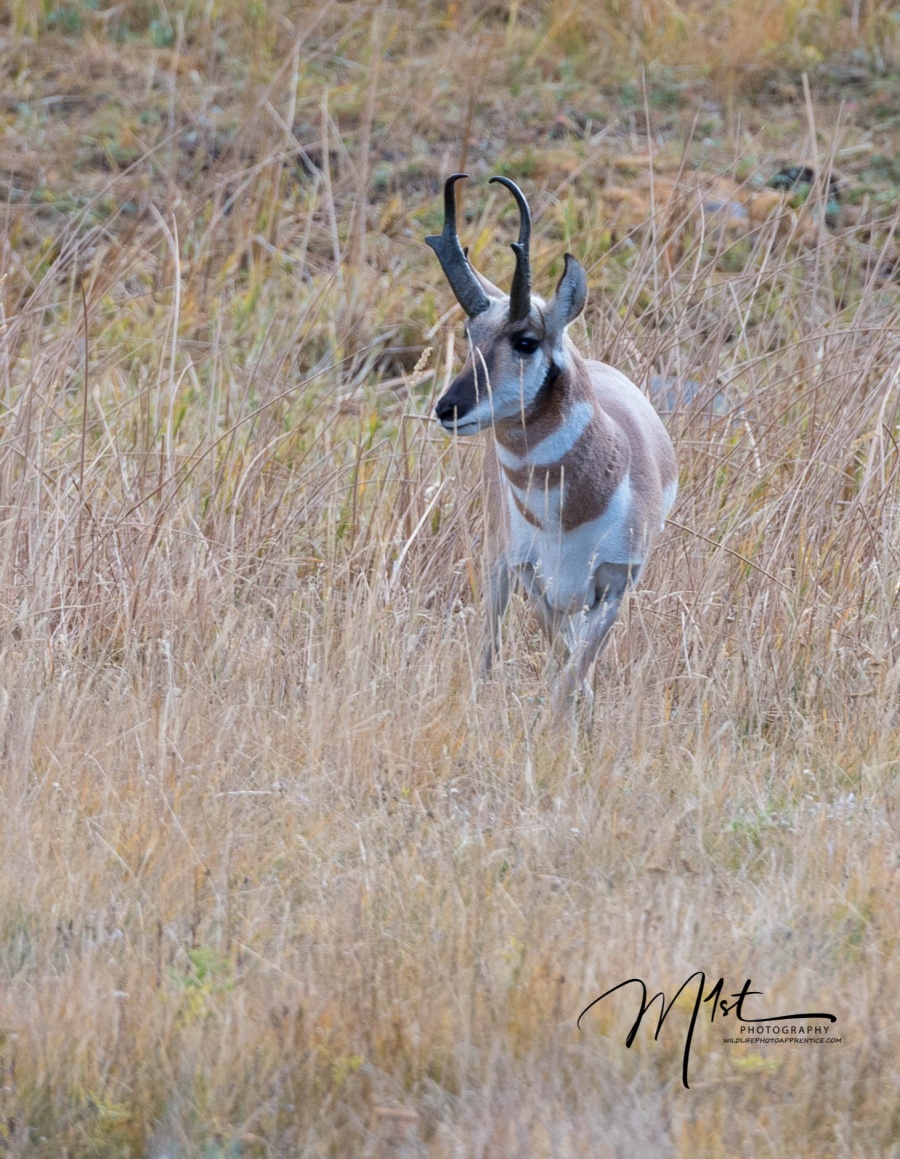 Several pronghorn antelope crossed the road just after the north entrance. Bison were everywhere.  The resident bull elk in Mammoth was directing traffic at the turn-off to Tower Junction.

We arrived at Canyon Village around 3:00, and check-in was painless. Check-in is at the Washburn Lodge, one of many lodges at Canyon, something that wasn’t immediately apparent when we arrived and not pointed out when we made reservations. 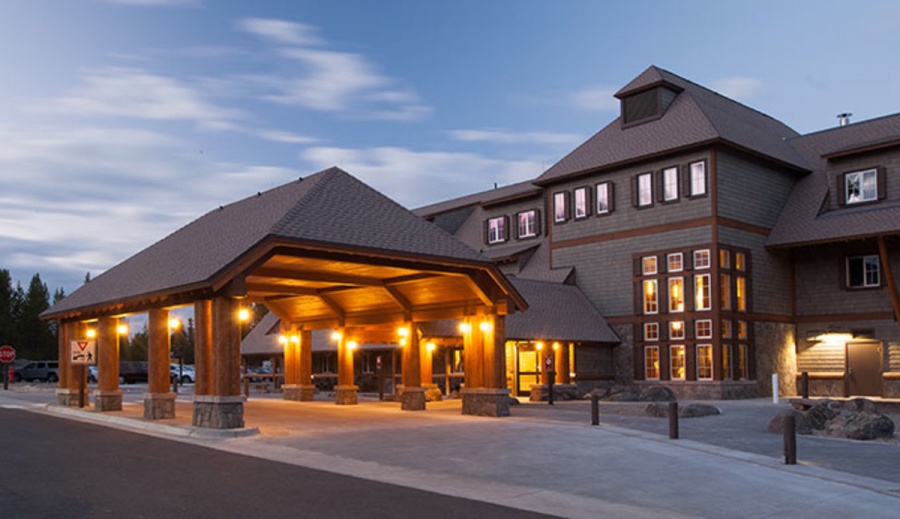 Having checked in and stored our gear, we decided to check out the closest and one of the most interesting parts of the park.  A part of the park for which Canyon Village is named, The Grand Canyon of Yellowstone. 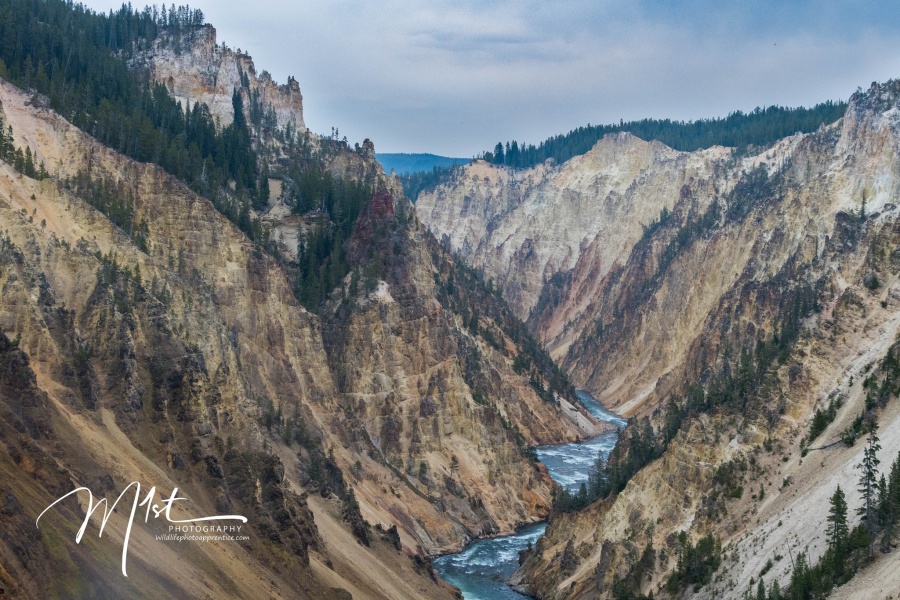 The specifics of the geology of the canyon are not well understood, except that it is an erosional feature rather than the result of glaciation. At the end of the last glacial period, about 14,000 to 18,000 years ago, ice dams formed at the mouth of Yellowstone Lake. When the ice dams melted, a great volume of water was released downstream causing massive flash floods and immediate and catastrophic erosion of the present-day canyon.

Access to the canyon is just south of the village via roads that are on both the north and south sides of the canyon. There are multiple access points and overlooks with parking that gives great views of the upper and lower falls. The landscape photography opportunities are endless from the various observation points. Don’t forget to pack a wide-angle lens, I chose a  Nikon 14-24mm 2.8 zoom. The use of a tripod is possible depending on the crowd, but I chose to shoot handheld. 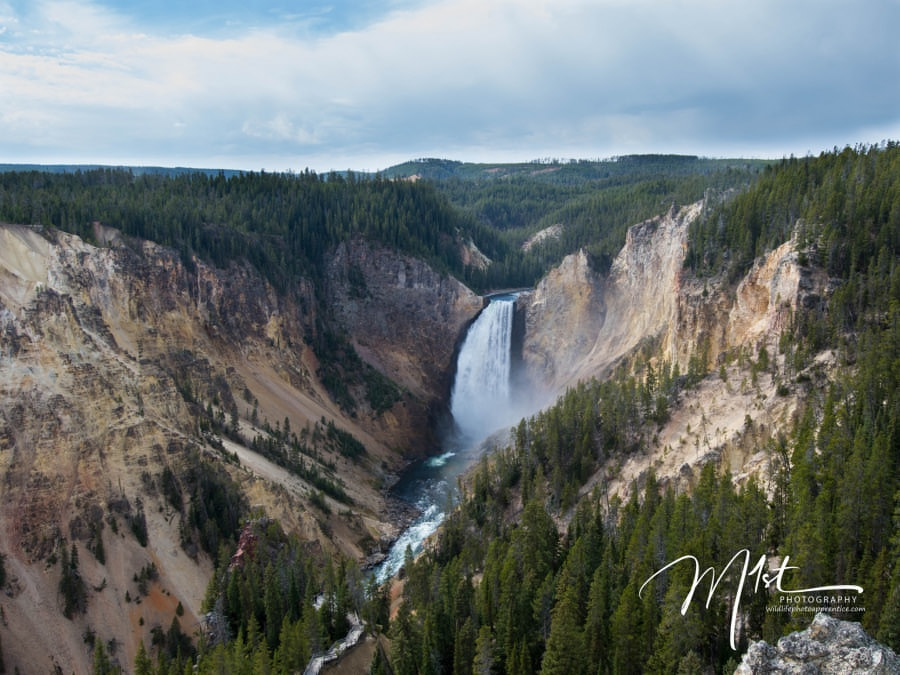 One access point leads to the brink of the lower falls. The walk to the brink of the lower falls is about an eighth of a mile to the bottom through a series of switchbacks. The trail is steep, about the same grade as walking stairs. The trail dead-ends at the edge of the lower fall where you can stand feet from the Yellowstone River as it drops 320 feet over the falls to the canyon floor below. It’s a frightening and awe-inspiring sight that should not be missed. Visitors should be aware that a park is a wild place and that wildlife can be encountered at any time. Even though I bought the bear spray, I didn’t carry it with me on the short walk to the bottom of the brink trail. I  won’t do that again. Close to the bottom we rounded a switchback and encountered a black bear coming up the trail. 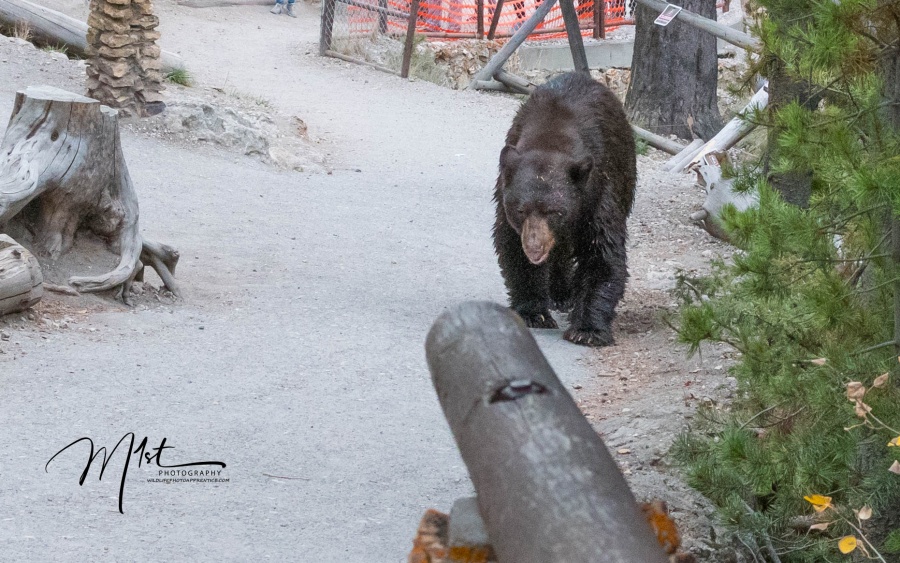 Fortunately, I had my camera and grabbed a few shots before carefully and slowly backing up the trail and giving the bear some space. Rather than continue up the trail towards us, thankfully the bear chose to cut off the switch back and proceed directly up the hill around us. I never felt threatened, and I think the bear wanted to avoid us as much as we wanted to avoid him. An exhilarating start to our first day. The moral of the story I guess is the boy scout motto, always be prepared. 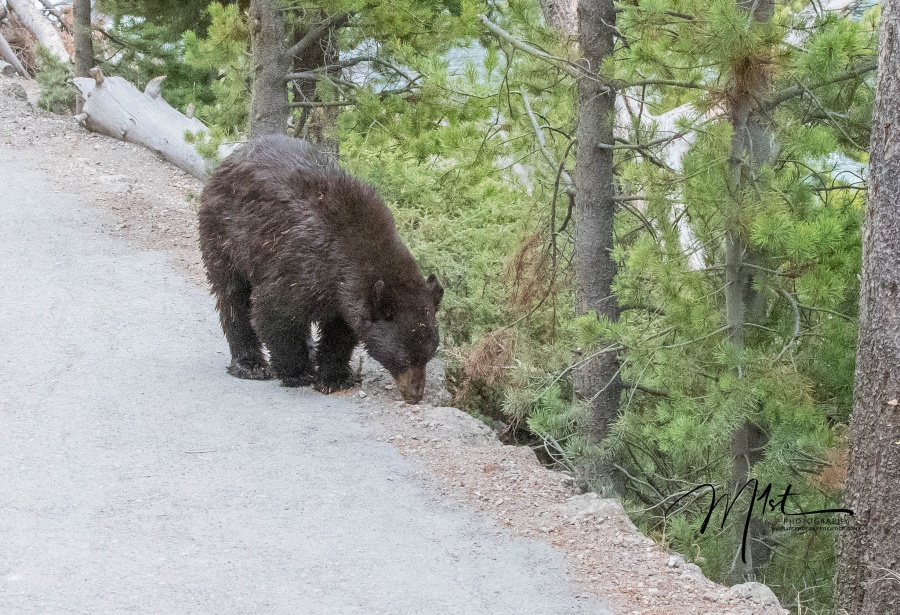 Our first day in the park had been a good one. We had seen Antelope, Bison, Black Bear, Elk, and Bald Eagle. Not a bad beginning to the trip. We decided to call it a day and return to the village. We returned to Canyon Village and evaluated our options for dinner and libations. There are several choices available. The Village has the Canyon Eatery, the Diner in the General Store, and the M66 bar and grill. The menus and hours of operation are available online for each restaurant. 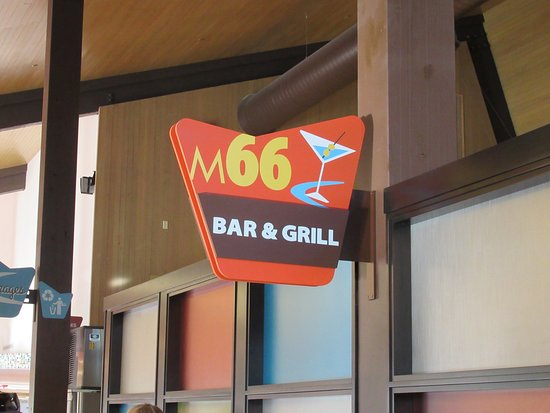 We decided to give the M66 Bar and Grill a try. The grill is the “fine dining” option in the Village, and as we discovered requires reservations to be seated. Not wanting to eat the cafeteria option at the Canyon Eatery, we chose the bar.  There were several appetizers on the bar menu. The chicken wings and Montana Cheese Plate were delicious and provided plenty of food. The local draft beer named “Moose Drool” was a nice compliment to the food. After dinner, we retired to the room to get ready for an early start in the morning heading to the Lamar Valley. Join me in part 3 to see what happened next.