As we discussed in the last blog, sometimes when you set out to photograph wildlife you have no particular animal or bird in mind to photograph but simply have a location from which to take photographs.   This may be the local park, a  wildlife refuge, a lake, or a friend’s ranch.  I’m fortunate to have access to a vacation home in northern New Mexico.  It lies on about forty acres of pasture and forested land with a small creek along one side. The large pasture out back is it’s own ecosystem with  a variety of animals, insects and birds.  It is a great place to employ the technique of simply concealing oneself, standing and waiting for wildlife to present themselves to be photographed.  In effect it gives me the opportunity to be ” a man out standing in my field”.

An Ecosystem is a biological community of interacting organisms and all their interrelationships in a particular unit of space.  An ecosystem can be as large as a desert or a lake or as small as a tree or a puddle.  A healthy ecosystem has lots of species diversity and is less likely to be seriously damaged by human interaction, natural disasters and climate changes.  The field I was standing in is an ecosystem.  This back field for me also serves as my wildlife photographic ecosystem.  With a little time and some patience the diversity and abundance of my field’s ecosystem came clearly into focus for me.

Insects are plentiful in the field and are a great starting point while waiting for other photographic action to occur.  Even though I only had my telephoto lens, it’s possible to take near macro photos of them with a telephoto lens.  Macro photography is the art of capturing the fine detail of very small subjects that may not be able to be seen by the naked eye. 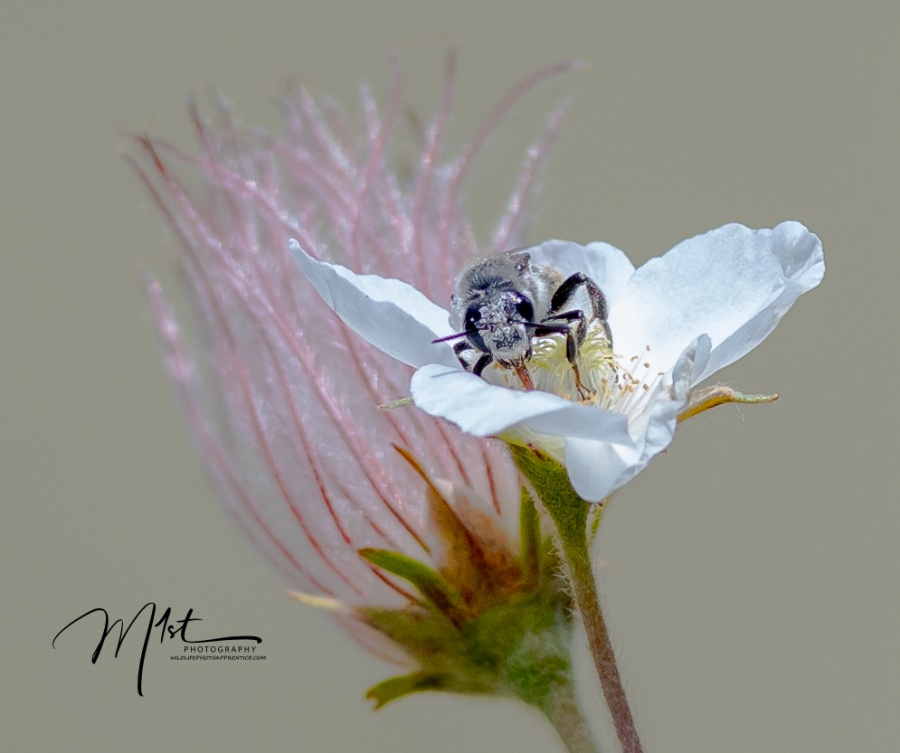 Technically, to fall under the term ‘macro’, the subject should be captured with a reproduction ratio of 1:1, i.e. the subject will be captured on the sensor at 100 % life size.  Telephoto lenses are limited to close-up photography, at near-macro reproduction ratios.  While limited, the results can be great, and carrying a telephoto lens is more versatile  than a macro lens and necessary for wildlife. 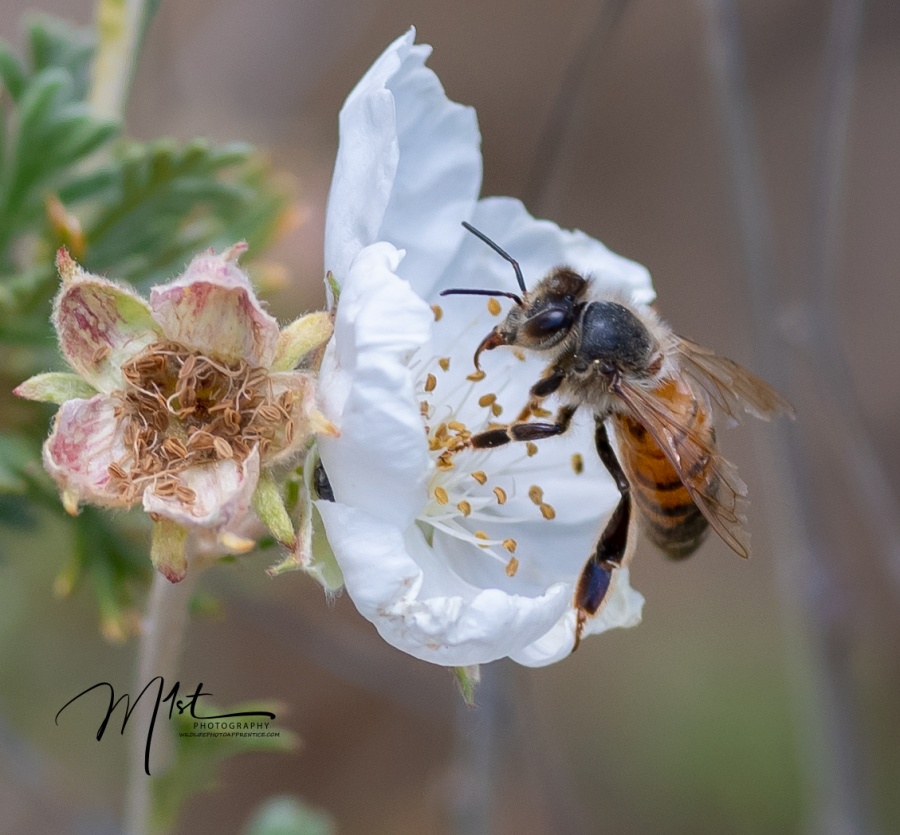 There are two basic advantages to using a telephoto lens for near macro photography. Because of the large minimum focal distance you have less of a chance of disturbing your subject.  You are also less likely to throw a shadow over your subject, thereby improving the lighting. 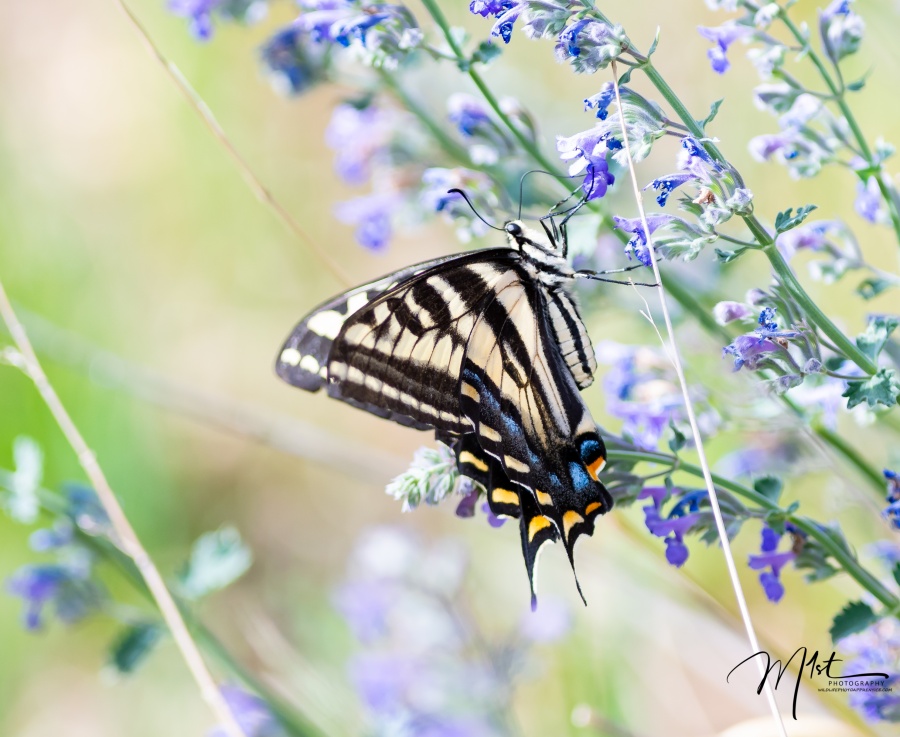 Give near macro photography with a telephoto lens a try the next time you’re standing in a field waiting for other action to happen.

As the day progressed I looked a little farther out into the the field, and it became evident that one of the most common members of the ecosystem to photograph would be the birds. Birds, also known as Aves, are a group of endothermic vertebrates, characterised by feathers, toothless beaked jaws, the laying of hard-shelled eggs, a high metabolic rate rate, a four-chambered heart, and a strong yet lightweight skeleton. 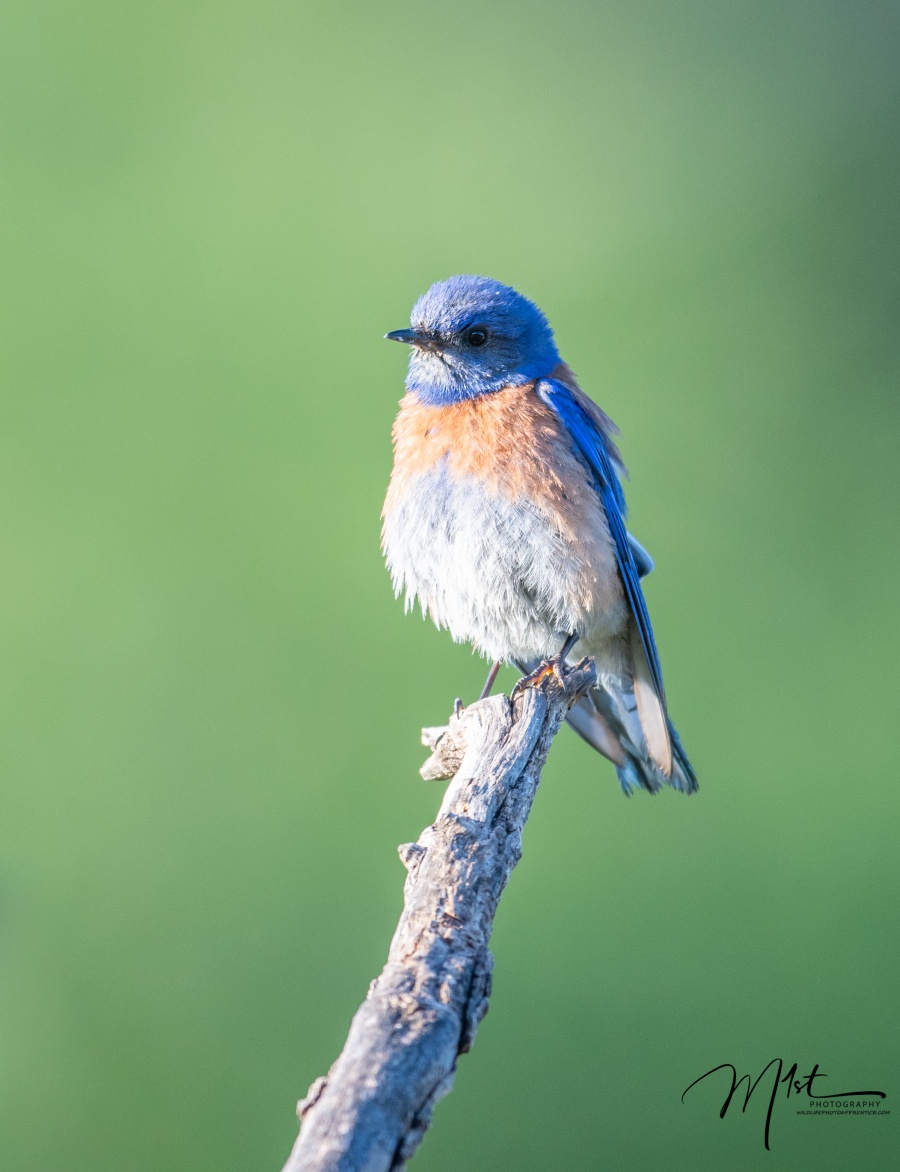 About 10 years ago, two scientists decided to estimate the total number of birds on the planet. The number they came up with was 200 to 400 billion individual birds. Compared to 5 billion people, this amounts to about 40 to 60 birds per person. Consequently, as a wildlife photographer, you’ll find birds are one of the easiest targets to find but also one of the most difficult to photograph.

As I stood and watched the field I first noticed Western Bluebirds.  The Western Bluebird is a small thrush, about 15 to 18 cm in length. Adult males are bright blue on top and on the throat with an orange breast and sides, a brownish patch on back, and a gray belly and undertail coverts. 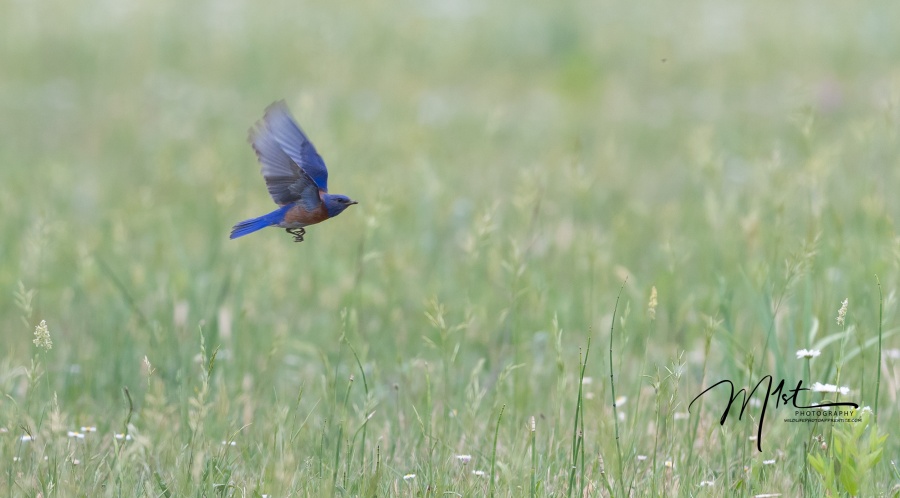 Bluebirds are a group of medium-sized birds, mostly insectivores.  Adult females have a duller blue body, wings, and tail than the male.  They have a gray throat, a dull orange breast, and a gray belly and undertail coverts. 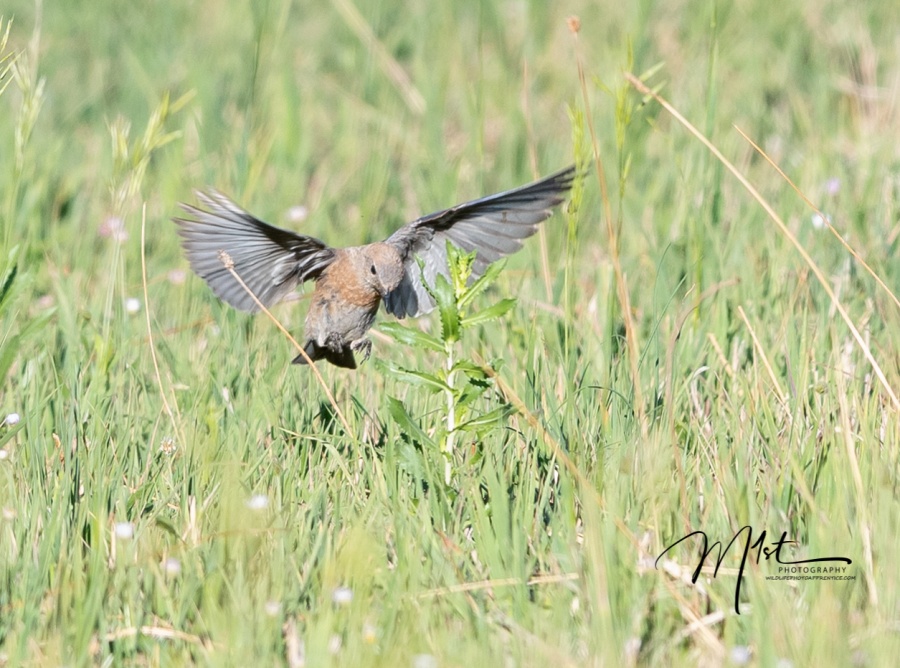 The bluebirds would perch on the telephone wires, and as the sun rose they would swoop into the field and catch insects.  The action went on for several hours. 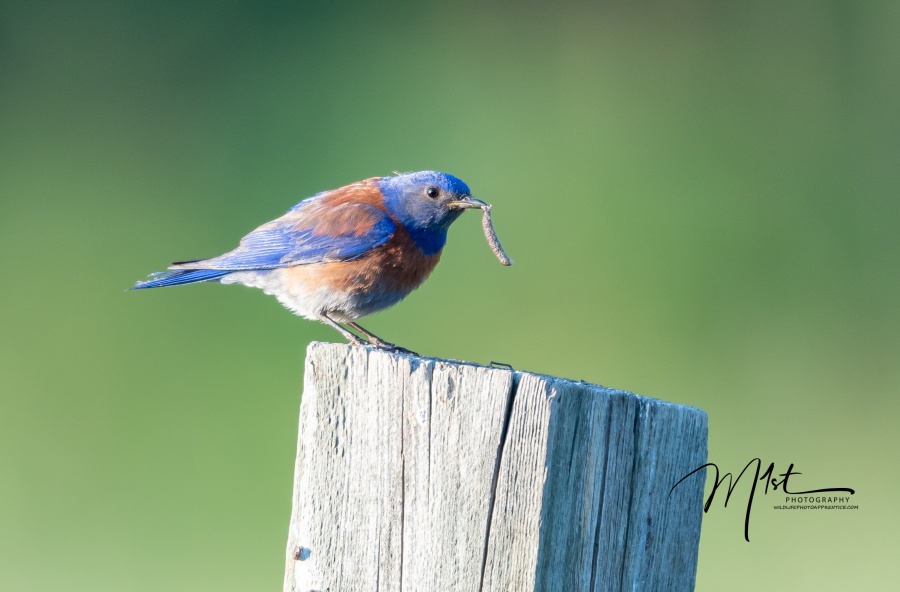 While watching bluebirds come and go I was startled by a strange sound.  The sound was similar to a loud swooosh.  As I looked around to see where it came from, a large bird landed in the field with a smaller bird in its talons.  It was a Peregrine Falcon with its catch. 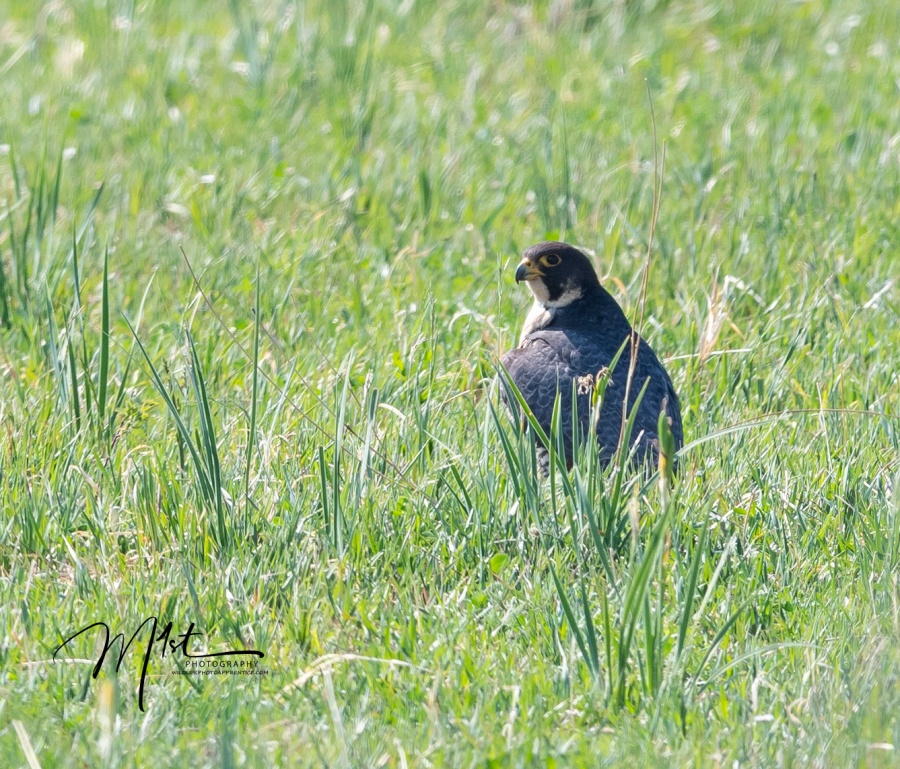 One of the world’s fastest birds; in power-diving from great heights to strike prey, the Peregrine may possibly reach 200 miles per hour.   Peregrines often hunt by flying very high, then swooping in a spectacular dive to strike prey out of the air.  It was this dive onto its prey that I had heard.  Startled by my unexpected presence the falcon soon gathered up its catch and flew away across the field. 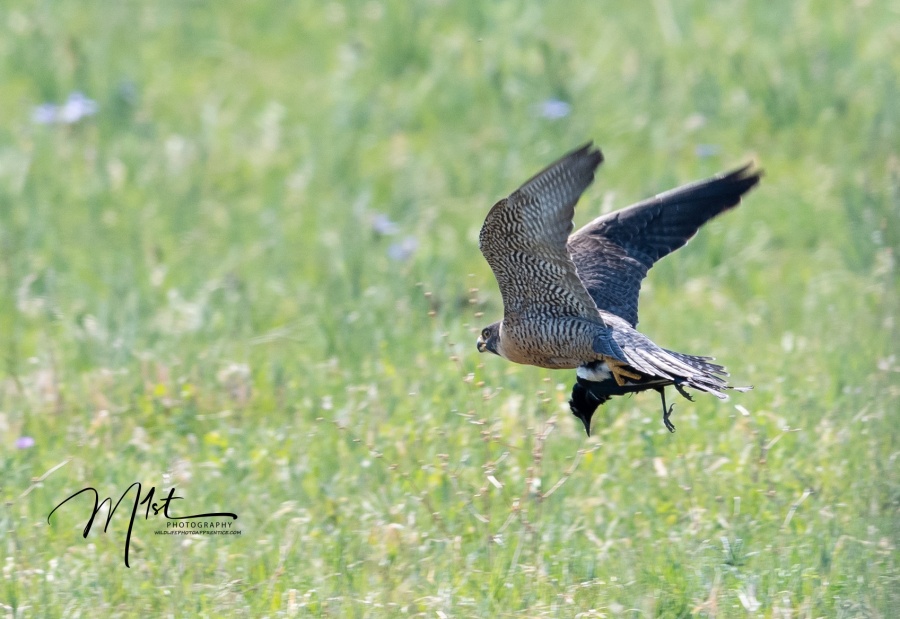 As the day drew to a close a small hummingbird sat on the fence in front of me.  His bright neck feathers catching the sunlight as the sun set.  Overall it was a productive day for wildlife photography,  and I managed to get several good shots. 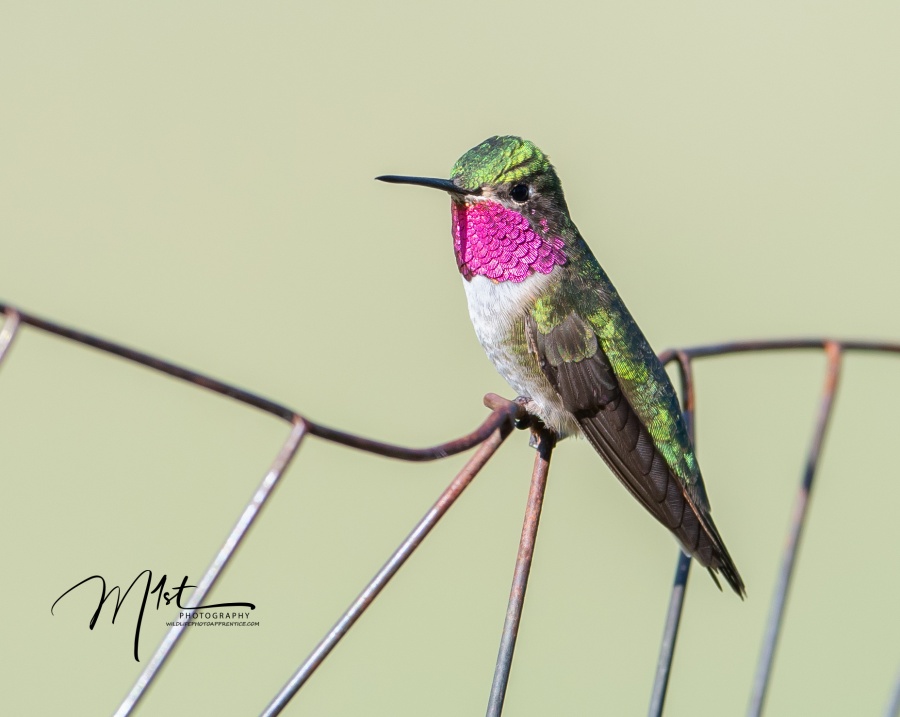 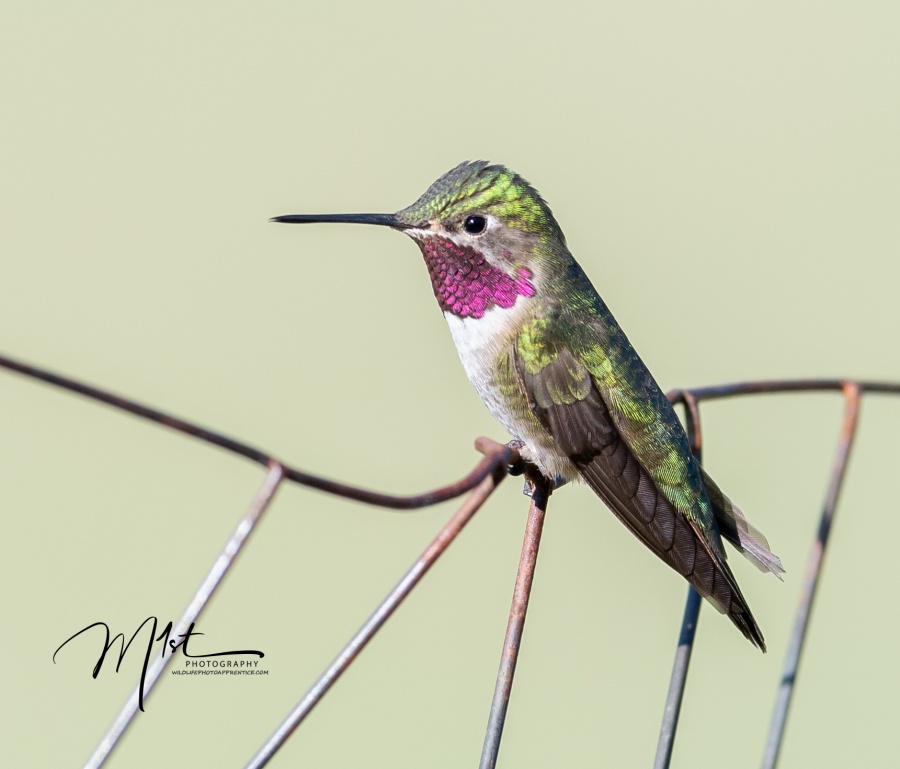 As I packed up my equipement and headed to the house,  I couldn’t help but reflect on how this technique of simply standing in one place and waiting for wildlife to come to me had been so effective.  It had in fact been a good day to be out standing in my field.  Check out what happens the next day in the field in part 2.