The sun was due to rise at about 6:00 am the next day, so I was up early to position myself.  Hidden at the base of a large tree at the edge of the field,  I sat listening to the sounds of the morning as sunrise approached. I adjusted my ISO to achieve an acceptable shutter speed in the low light conditions, and I waited.  It wasn’t too long before I heard the noise of large animals moving through the brush down by the stream.  Soon a number of what are the largest members of my field ecosystem began to wander into the pasture.  A small herd of elk. 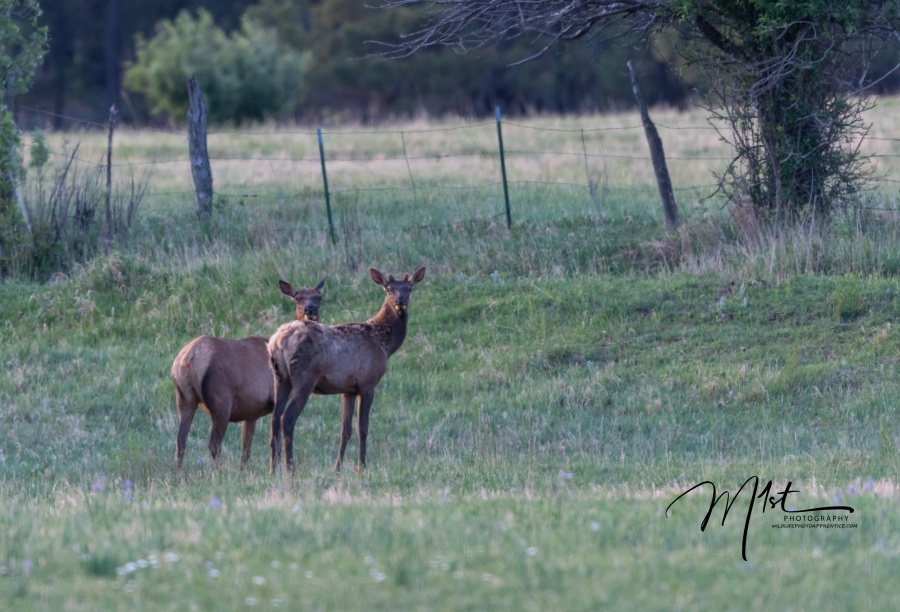 The elk or Wapiti is one of the largest species within the deer family, Cervidae, in the world, and one of the largest land mammals in North America and Eastern Asia.  Elk range in forest and forest-edge habitat, feeding on grasses, plants, leaves, and bark.  I watched quietly as more and more elk entered the field to browse, a total of 17. 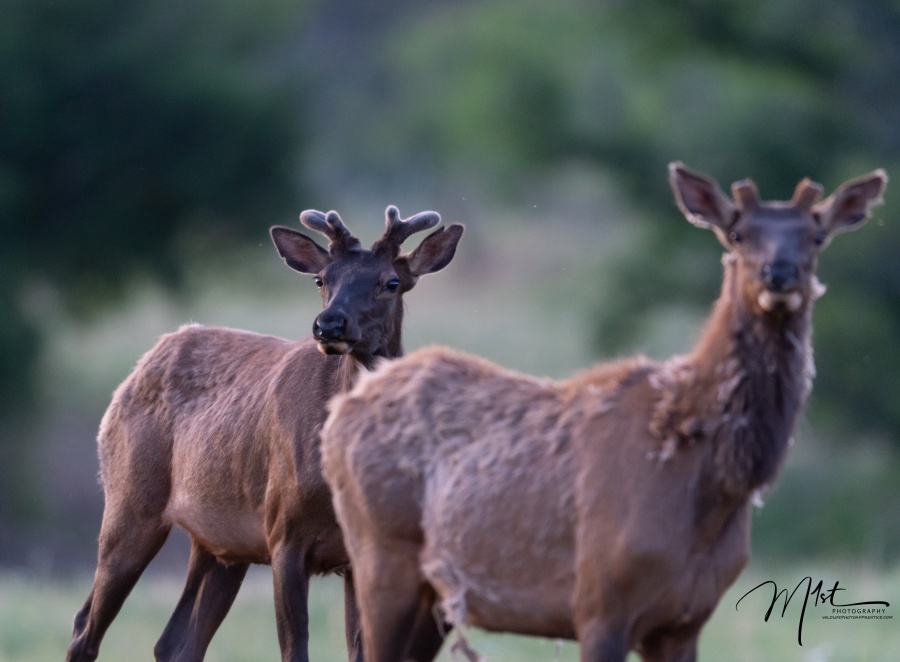 Male elk have antlers that may reach large size at maturity and which are shed each year.  Males also engage in ritualized mating behaviors during the rut, including posturing, antler wrestling, and bugling, a loud series of vocalizations that establishes dominance over other males and attracts females. 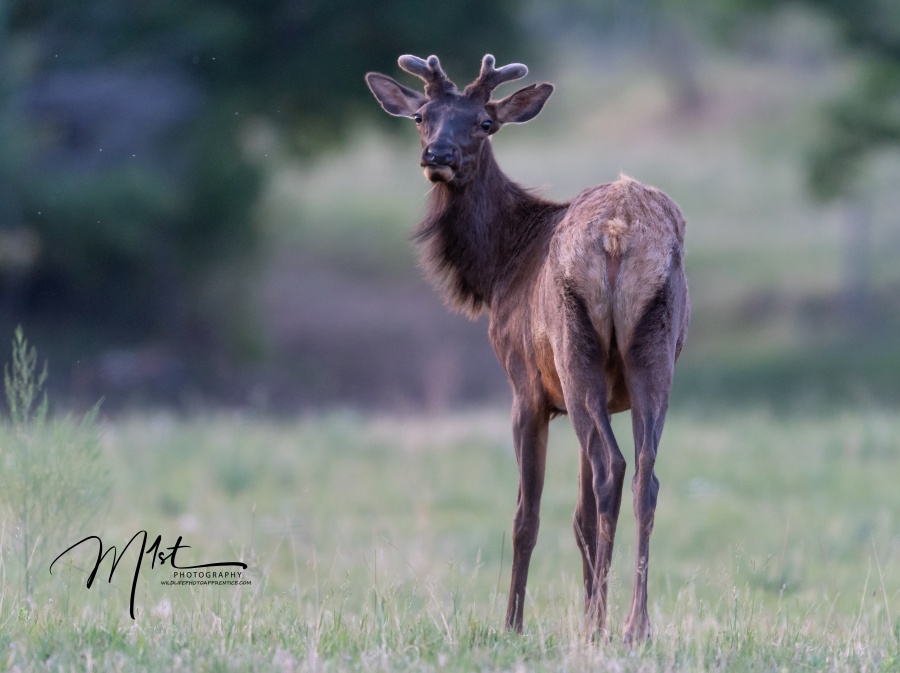 The largest male came closer and closer.  Because of my camouflage he simply couldn’t figure out what I was.  He could hear the clicking of my shutter, but as he sniffed the air repeatedly because of the wind direction, he was unable to scent me. It allowed me to get several close shots. 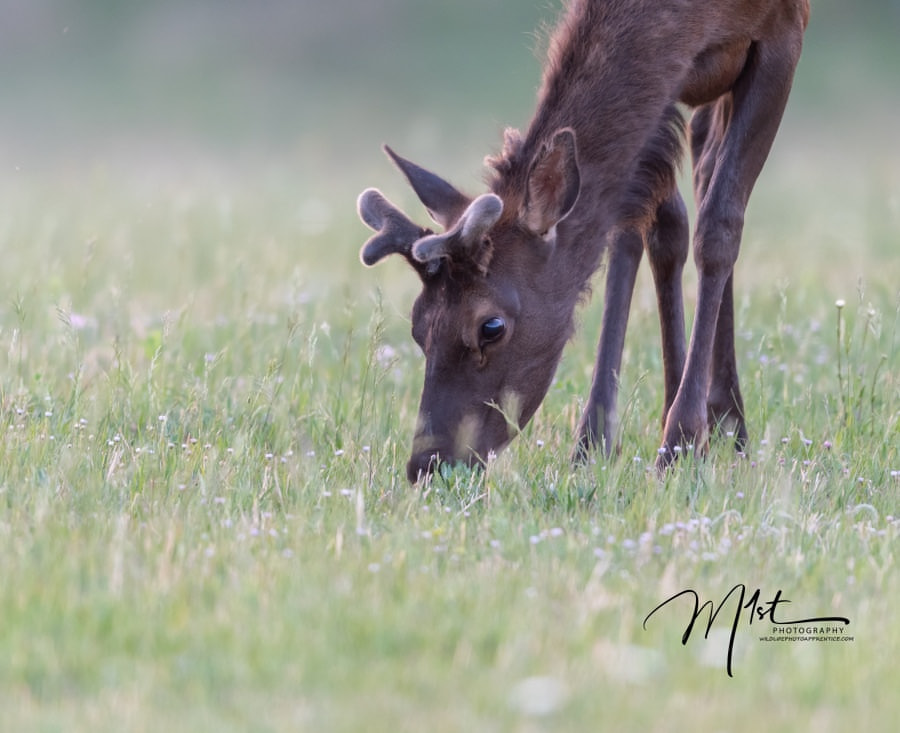 As the sun rose the elk slowly moved across the field to the forest and disappeared.  I sat quietly and waited for the next possible photographic opportunity to arise.

Already feeling I had a great day, I was startled to see something moving at the edge of the field. The sun was fully up, and the light was harsh so I adjusted my ISO and shutter speed again and peered through my viewfinder to see a large coyote enter the field.

The coyote; the name derives from the Nahuatl tribe, is a canine native to North America. It is smaller than its close relative the gray wolf, and slightly smaller than the closely related eastern wolf and red wolf. 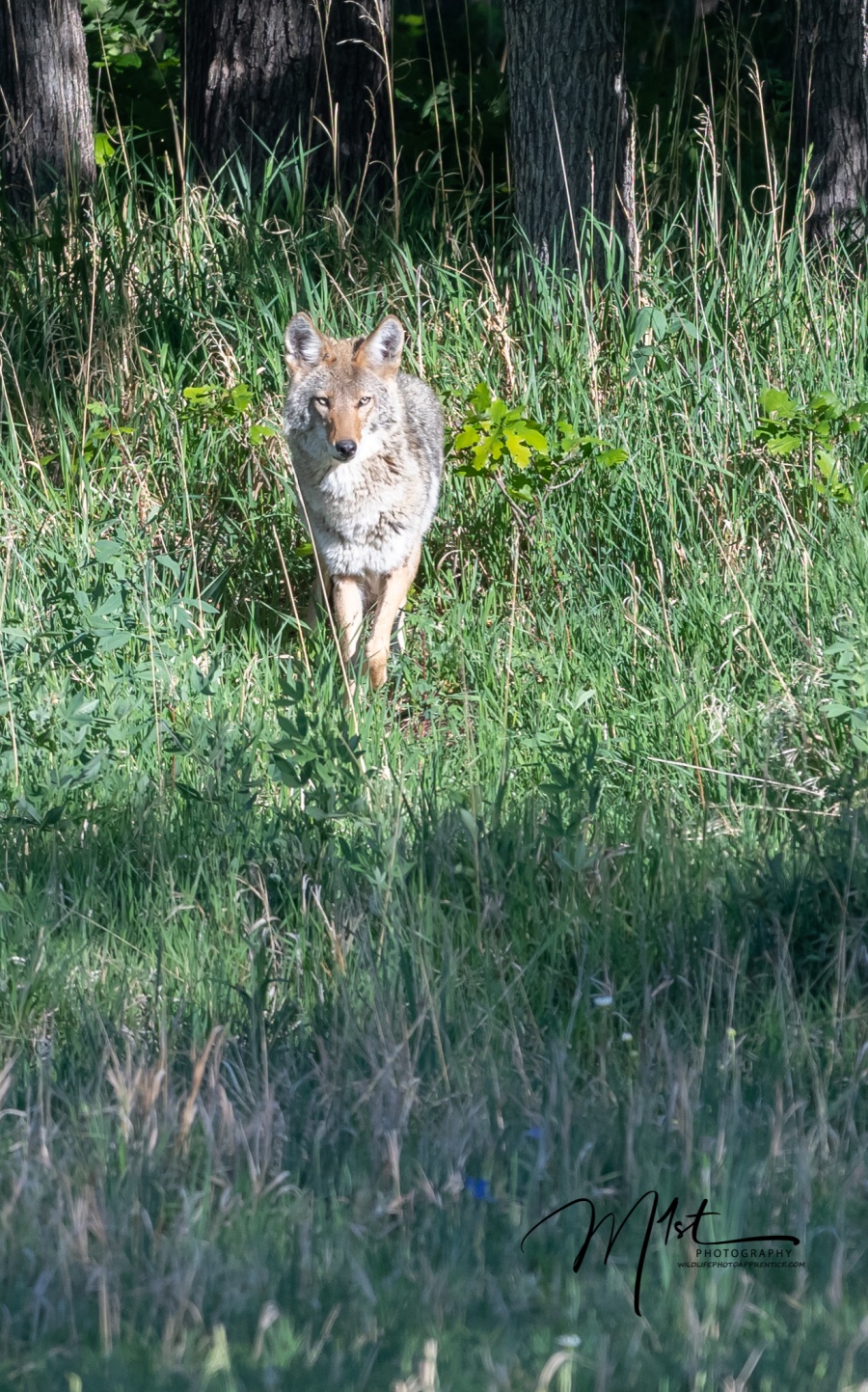 19 coyote subspecies are recognized. The average male weighs 8 to 20 kg (18 to 44 lb), and the average female weighs 7 to 18 kg (15 to 40 lb). Their fur color is predominantly light gray and red or fulvous interspersed with black and white, though it varies somewhat with geography. It is highly flexible in social organization living either in a family unit or in loosely knit packs of unrelated individuals. 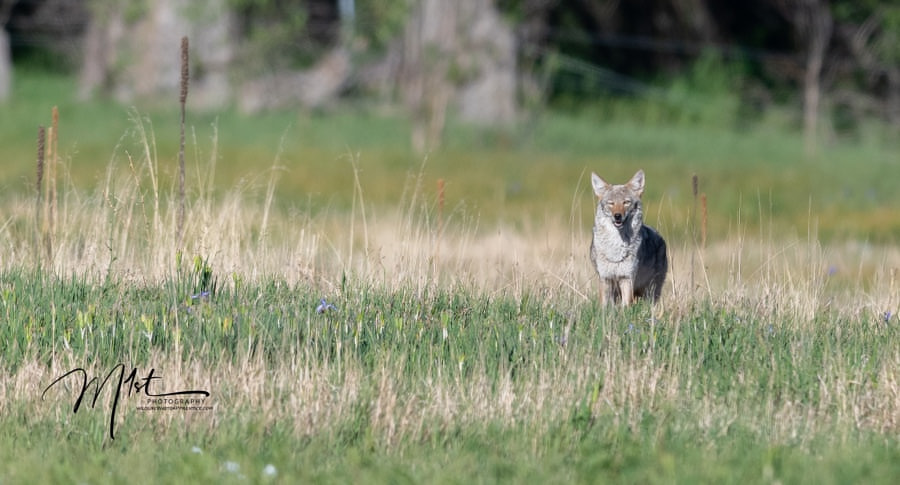 The coyote moused the field for a bit then moved on.  It was a beautiful animal and fun to photograph.

Later in the day I noticed something in the sky far off in the distance.  As the large circling bird moved its way closer I noticed it was a Red Tailed Hawk. 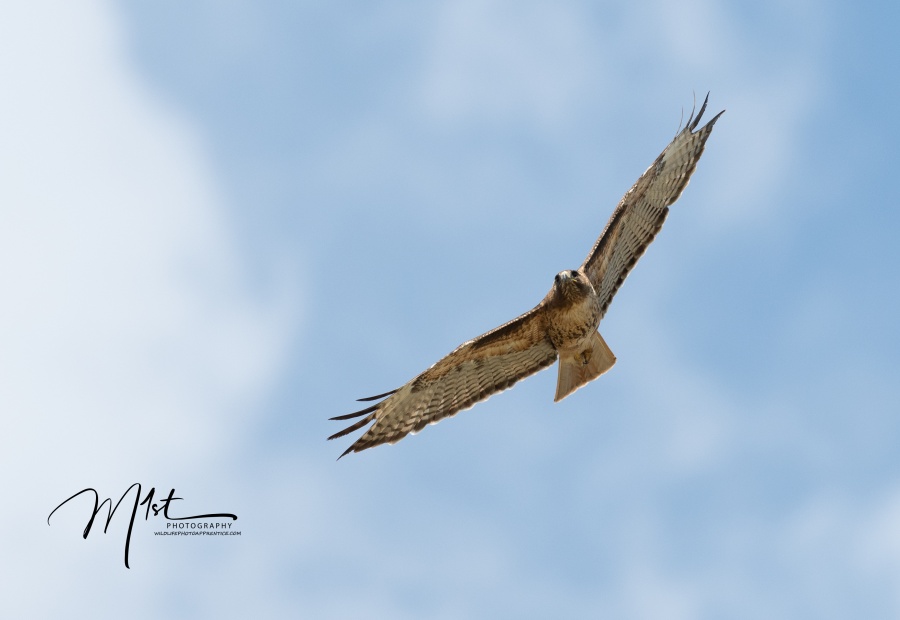 Red Tailed Hawks occupy just about every type of open habitat on the continent. This includes desert, shrublands, grasslands, roadsides, fields and pastures, parks, broken woodland, and (in Mexico) tropical rainforest.  As I watched, the hawk was joined by a second, and they proceeded to engage in an aerial ballet as they circled overhead, with their legs extended. 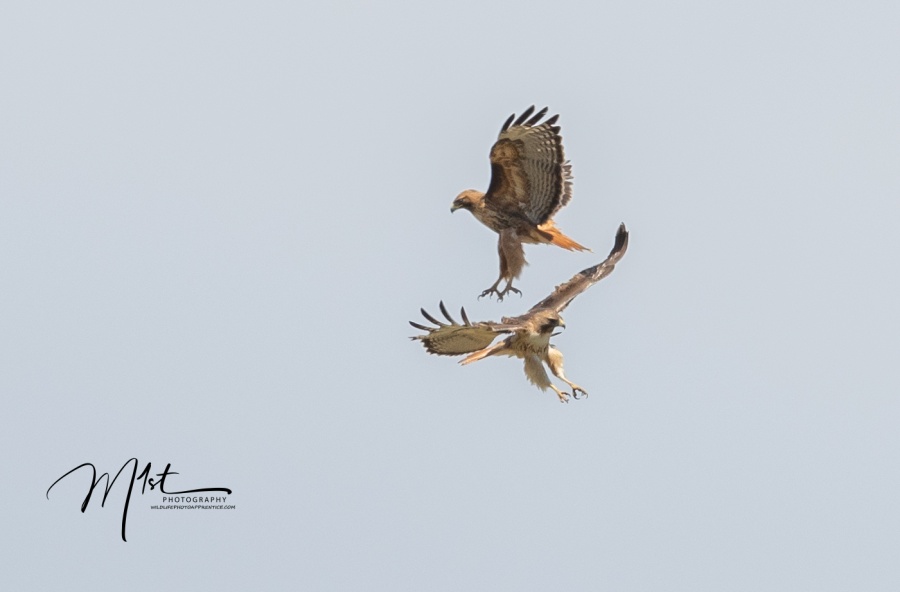 Red Tailed Hawks frequently chase off other hawks, eagles, and Great Horned Owls. Courting birds fly with legs hanging beneath them, or chase and swoop after each other, sometimes locking talons. Mated pairs typically stay together until one of the pair dies.

The second day came to an end with a Magpie stopping by to give a warning squak, alerting anyone else in the field to my presence.  He perched for several minutes on the fencepost as I grabbed several photographs before flying and disappearing into the forest. 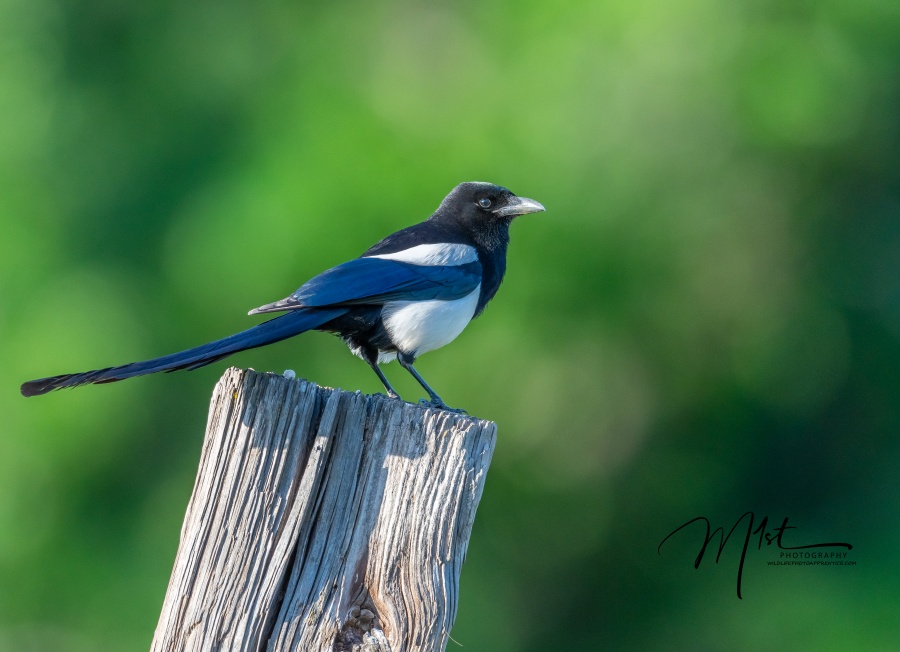 For two days I had remained virtually in the same spot concealed at the base of a large tree, not searching for wildlife but waiting for wildlife to come to me.  The technique worked well. In 48 hours I was fortunate to see and photograph several species of mammals, birds and insects. Pastureland provides the perfect environment for development of complex diverse ecosystems with plenty of wildlife to photograph.  If you have access to property with a pasture then consider being ” a man out standing in your field”. You’ll see some interesting wildlife, improve your wildlife photography skills and have a lot of fun.