While certain breeds of dogs occasionally climb trees it is certainly an unusual behaviour for most. Dogs primarily prey on animals that live on the ground and therefore have not evolutionarily developed the skills and anatomy to climb trees well.  Cats have strong backs and hind legs with sharp retractable claws which are well suited for tree climbing.  Dogs have weak backs and dull claws. The exception to the rule in the dog family is the Gray Fox. 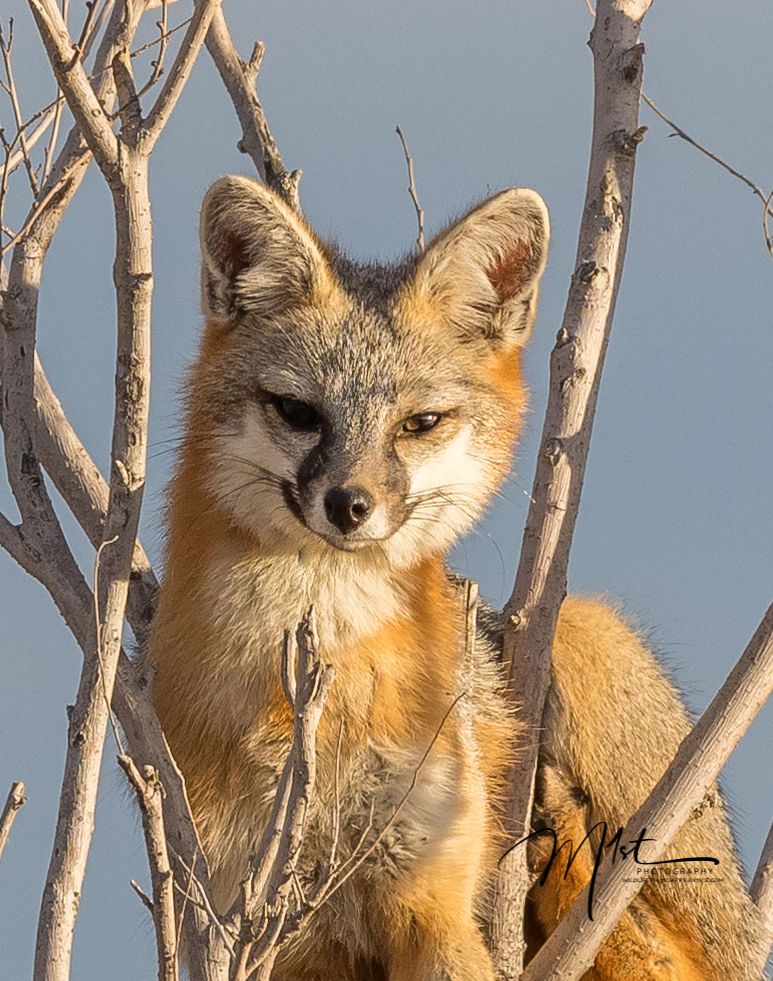 Where I live in West Texas, there are large areas of open country that lie close to urban areas. Gray Foxes are common in West Texas and live close to urban areas venturing into neighborhoods at night to grab a quick meal of dog food off a back porch or two. The Gray Fox is mainly distinguished from most other canids by its grizzled upper parts, black-tipped tail and strong neck, while the skull can be easily distinguished from all other North American canids by its widely separated temporal ridges that form a U-shape.  The Gray Fox’s ability to climb trees is shared only with the Asian raccoon dog among canids.

I left at dawn to get a jump on the birds at our local wildlife preserve.  My journey to the preserve takes me through an area where the open prairie butts up against neighborhoods. I often see wildlife during my drive, mostly coyotes and hawks.  This morning it was dark with a spectacular sunrise starting to materialize.  I noticed something in a tree out in the field by the road that I thought was a cat.  I stopped the truck and got out to investigate.  What I found was a Grey Fox sitting in the top of a tree. 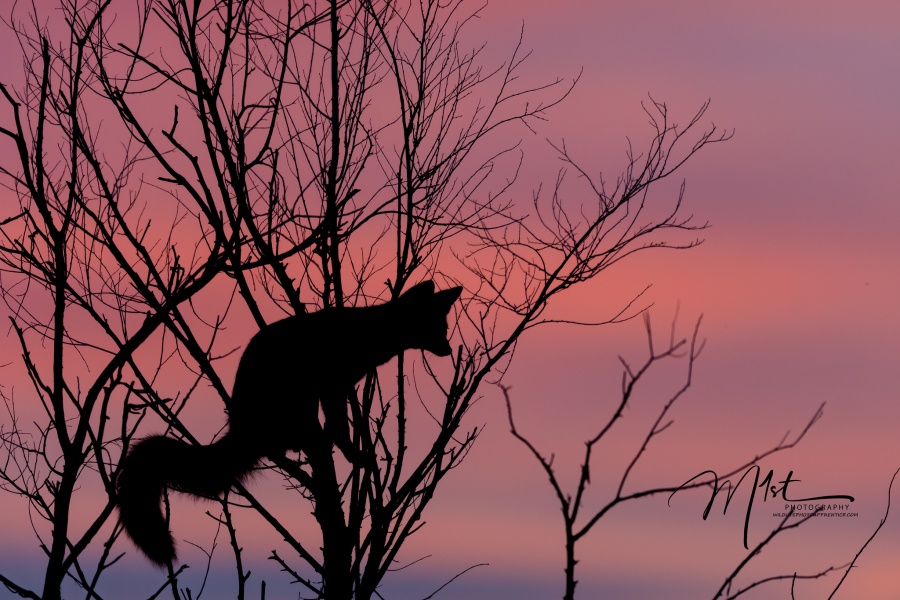 Gray Foxe’s strong, hooked claws allow them to scramble up trees to escape many predators, such as the domestic dogs or coyotes.  The fox was very vigilant and scanning the area below and to the sides of the tree.  I suspect but could not confirm that a coyote had caused him to take shelter in the tree. 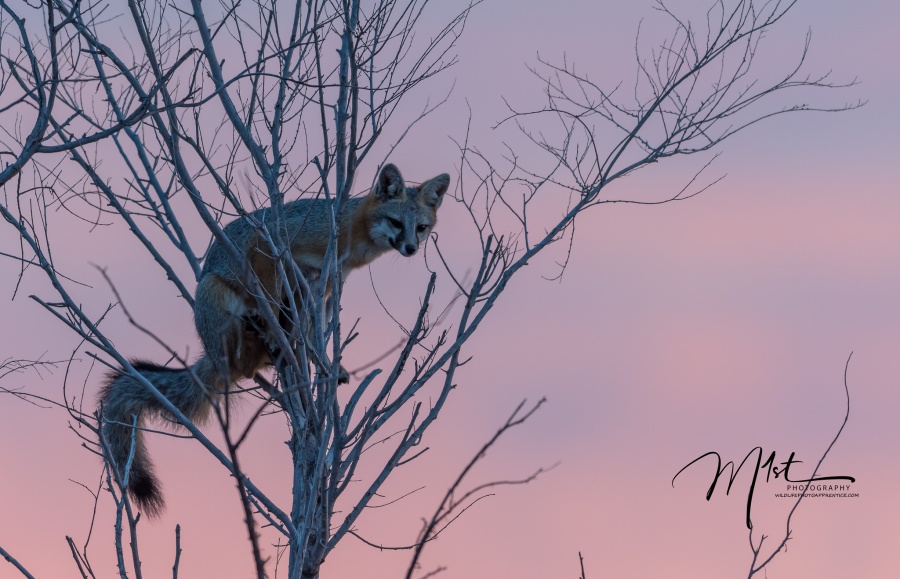 As the sun rose he remained content to stay in the tree even though by now he was alert to my presence.  I think he was more afraid of being breakfast for a coyote than having his picture taken. 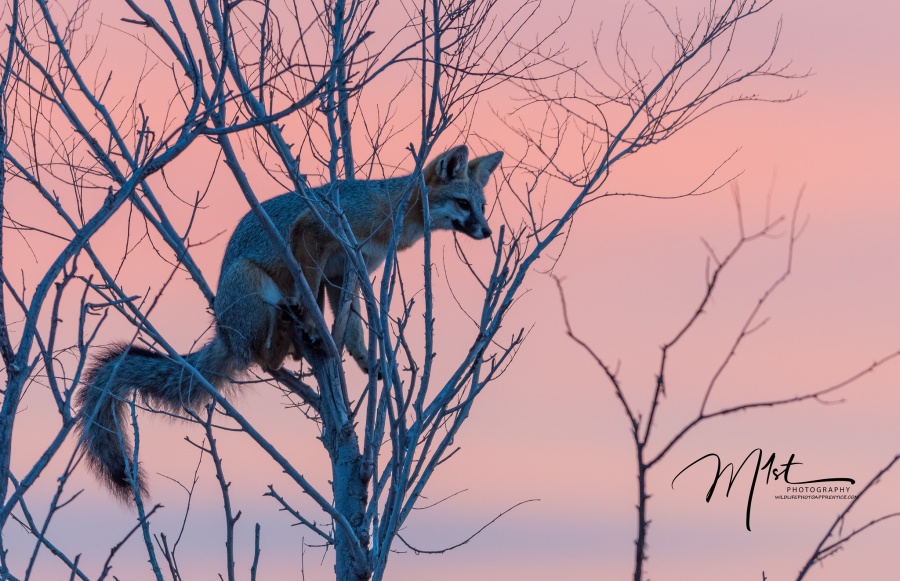 The gray fox is peppery gray on top, reddish-brown on its sides, chest and the back of its head. Its legs and feet are also a reddish color. It has a long bushy tail with a black stripe on top. The gray fox has pointed ears, a pointed muzzle. 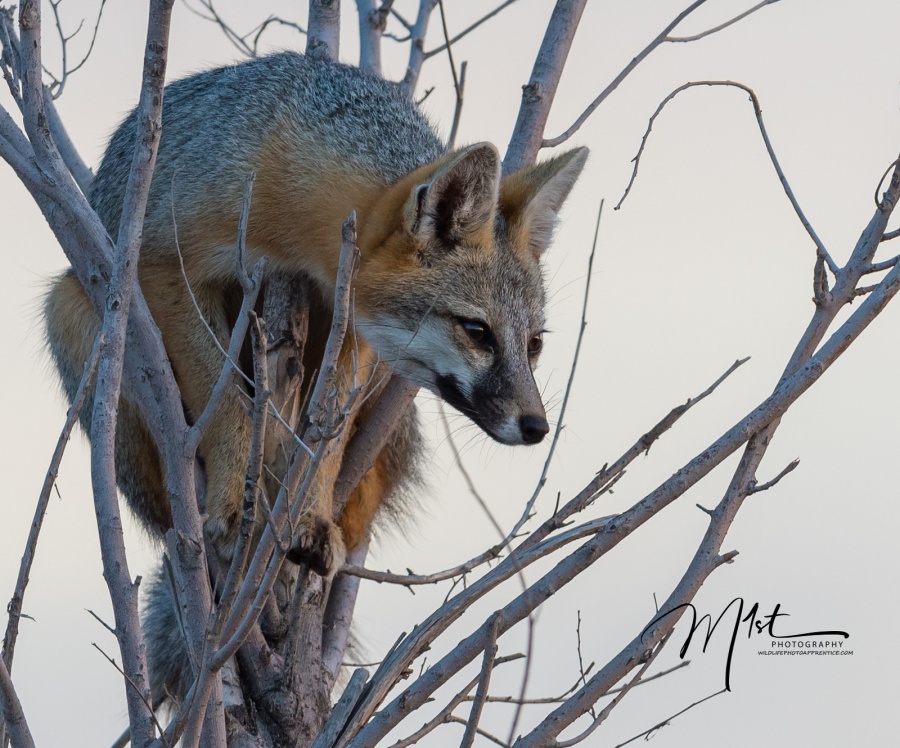 The gray fox can be found from southern Canada to northern Columbia and Venezuela. It is not found in some mountainous parts of the Northwest United States and in the Great Plains.

As the time progressed the golden hour light got better and better.  I was able to take my time and adjust my settings to get good exposure.  The fox sat patiently for more than an hour, a rarity with most animals and particularly with the mostly nocturnal gray fox. 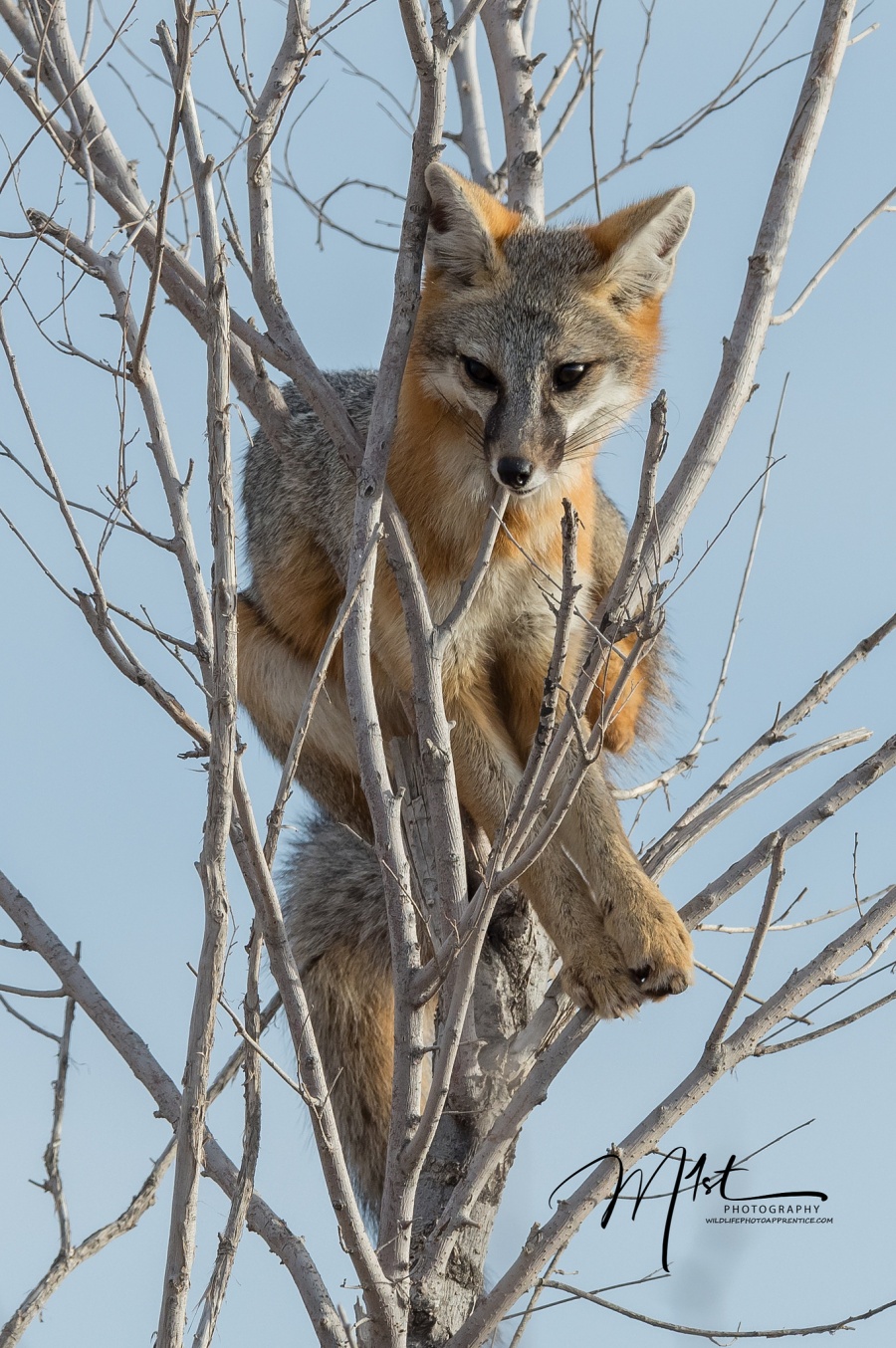 The gray fox is a solitary hunter and eats a wide-variety of foods. A large part of its diet is made up of small mammals like mice, voles and cottontail rabbits. It also eats birds; insects; and plants like corn, apples, nuts, berries and grass. In the summer and autumn, grasshoppers and crickets are an important part of its diet. 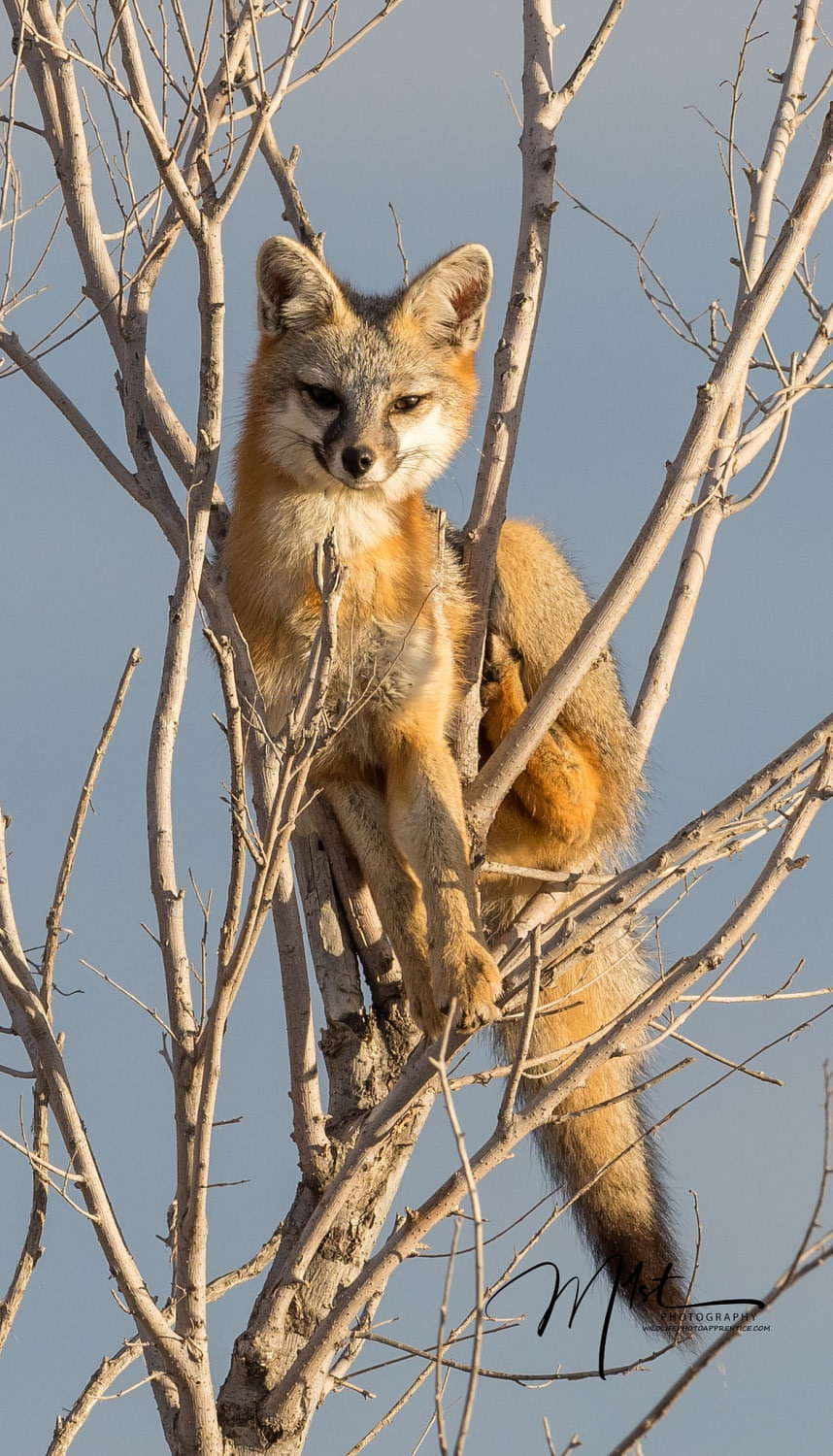 It was a special morning, and I greatly enjoyed photographing this beautiful tree climbing fox.