Walking the trail this morning I thought to myself that this may be the first morning that I just don’t see anything really worth shooting.  It’s unusual to visit our local wildlife preserve and not see a variety of birds that change throughout the seasons.  Most everytime I go out I find something to shoot.  It’s been dry in West Texas for several months and the playa lake at the preserve is almost dry. This has a significant effect on both the amount and variety of birds that visit. I was almost completely around the trail and had only seen a few Redwing Blackbirds. 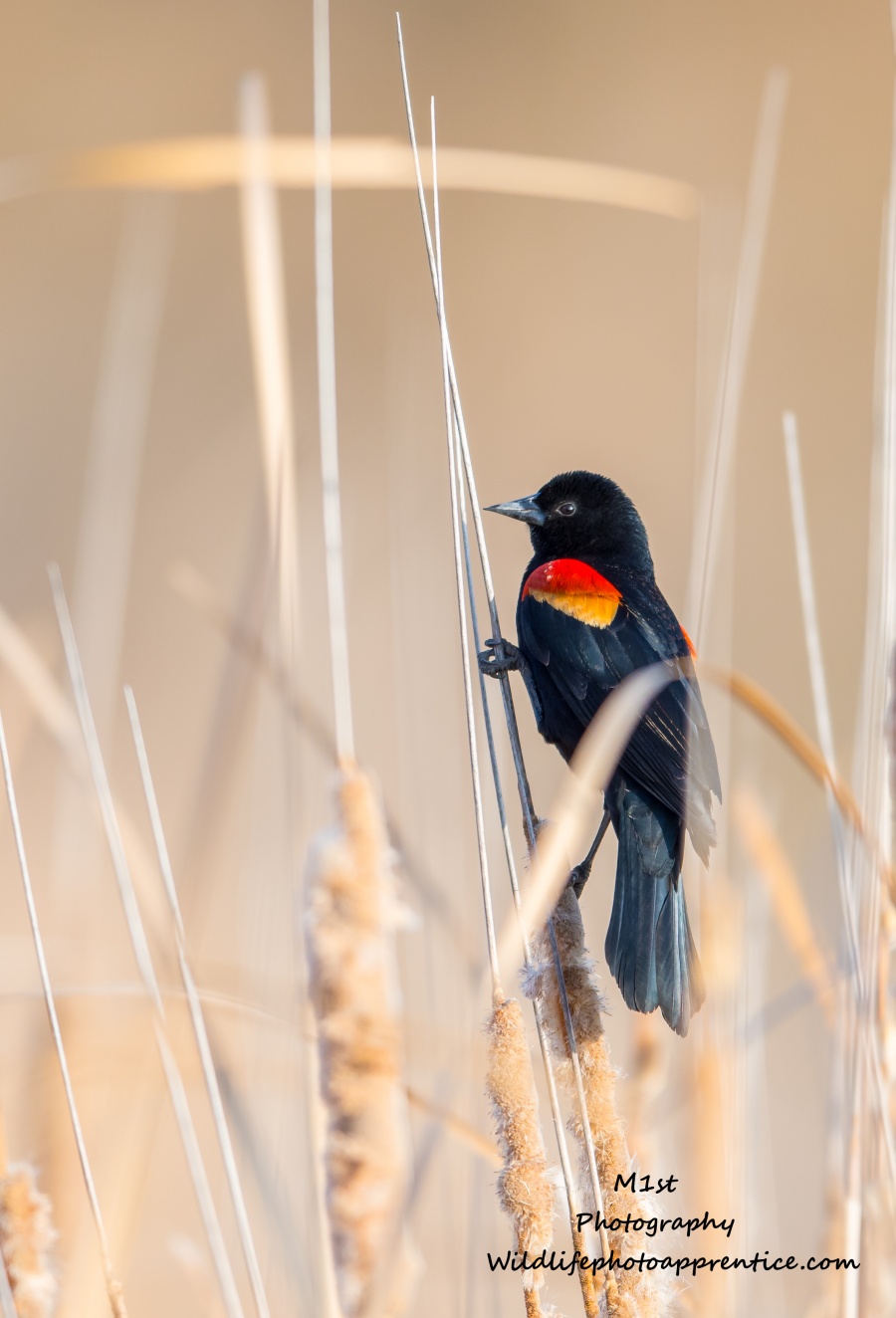 As I finished walking the almost two mile trail I heard the distinctive call of a Northern Flicker that sounded as if it were agitated or distressed.  As I rounded the corner the source of the distress became obvious.  A Coopers Hawk. 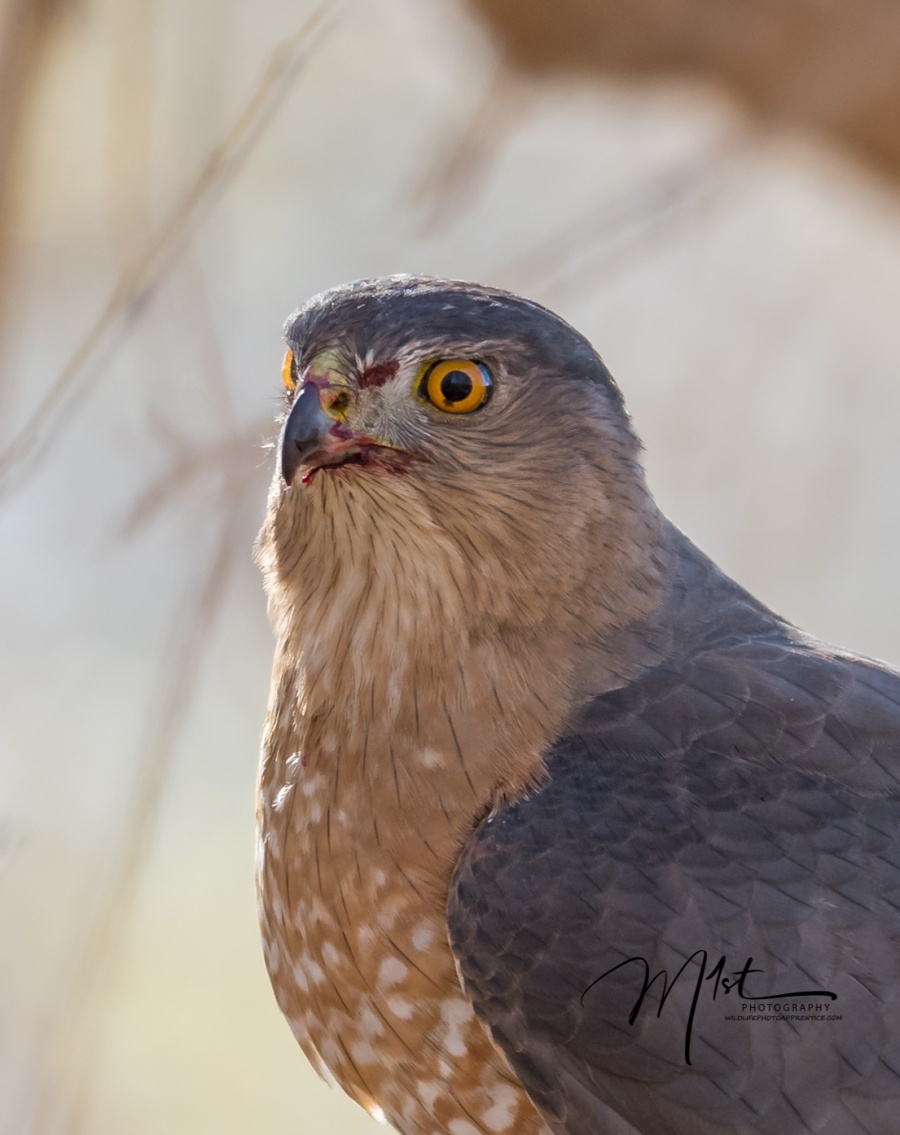 Little did I know that the predator prey circle of life was about to play out right in front of me.  A predator is an organism that eats another organism. The prey is the organism which the predator eats.  Predator and prey evolve together. The prey is part of the predator’s environment, and the predator dies if it does not get food.  Coopers Hawks are swift, bird-catching predators that prey on other birds.  In flight, the Coopers Hawk has great agility, being able to speed through the dense forest and surprise its prey.  As I focused on the Flicker, the Coopers  Hawk appeared out of nowhere and before either of us knew what was happening, the Flicker was captured. 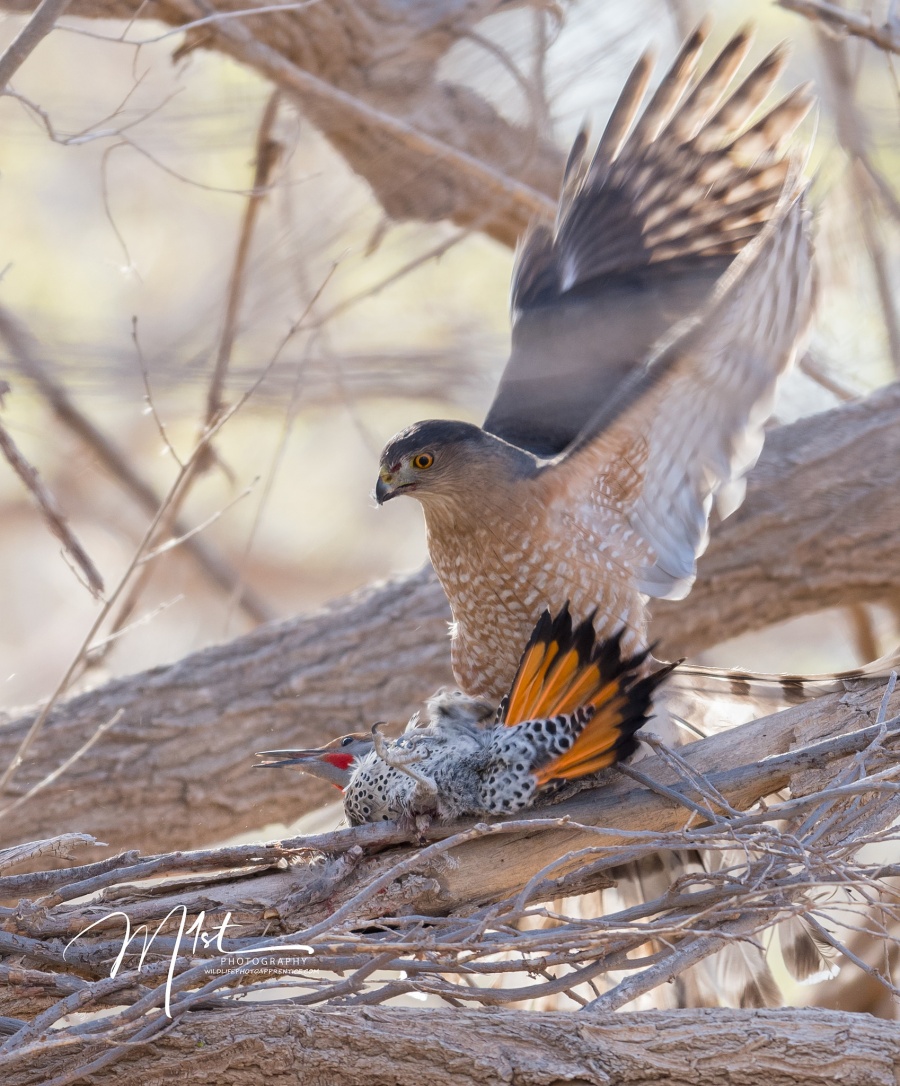 The Hawks attack was so swift there was no time for the flicker to react and it found itself tightly clutched in the hawks talons. 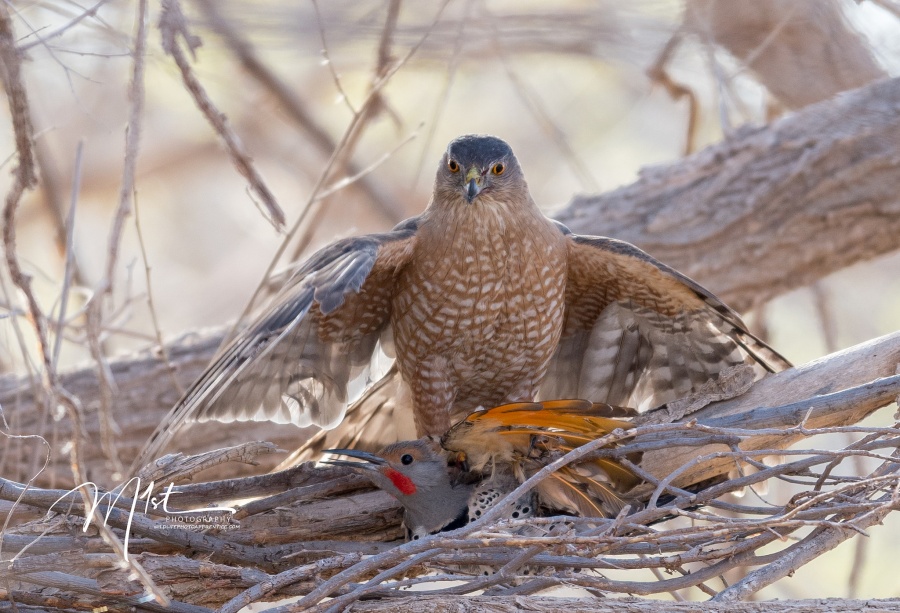 For some time the Hawk struggled to control the large Flicker. Normally their diet consists mainly  of small birds like thrushes, sparrows, warblers, and American Robins.  However, Coopers can eat woodpeckers, swifts, doves, shorebirds, quails, and even falcons. 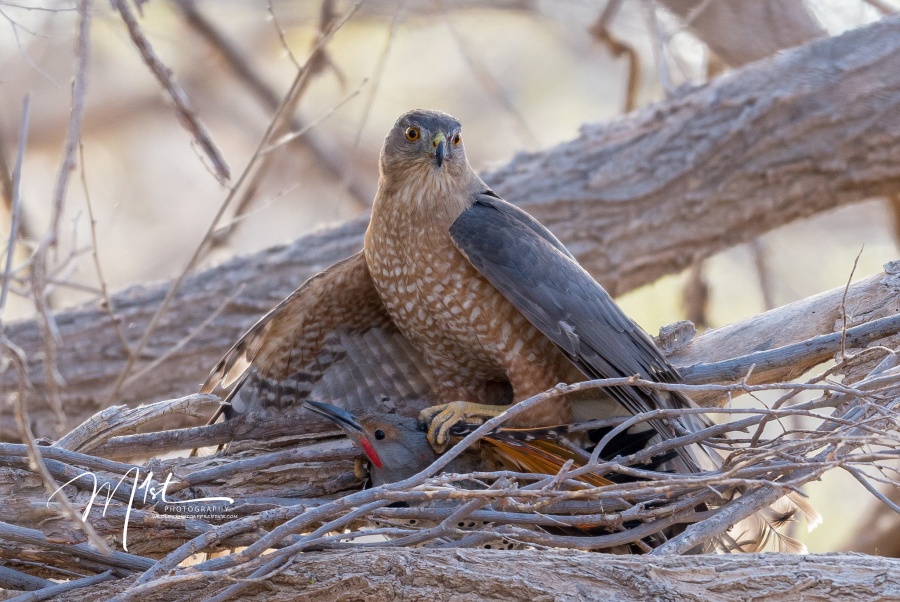 Coopers do not swallow the feathers of their prey. Instead, they carry it to a low branch or stump and pluck the feathers prior to eating them.  Eventually the Flicker succumbed to the  pressure of the talons and relentless plucking of its feathers. 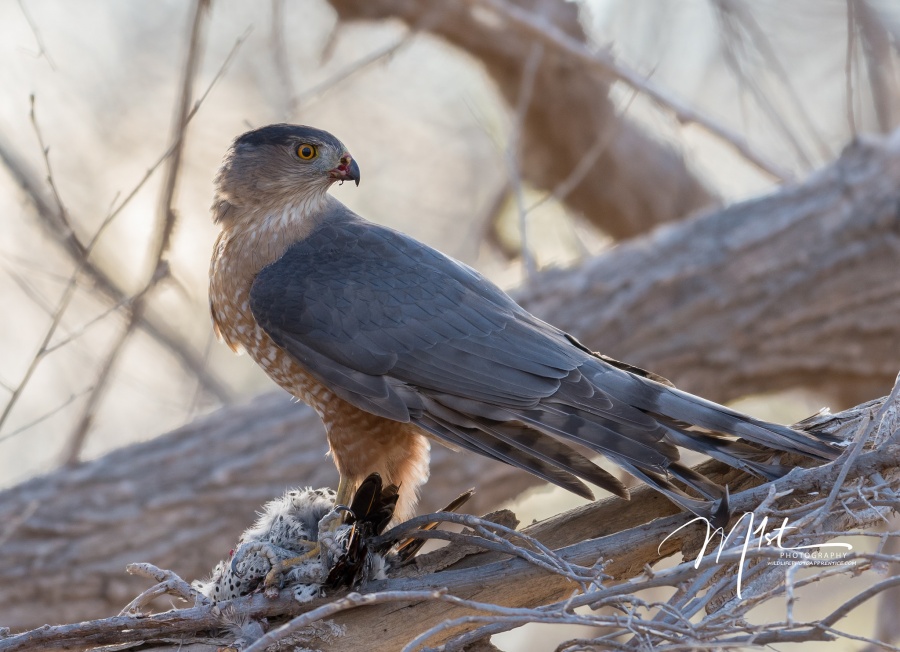 The hawk took his time consuming  the majority of the Flicker. 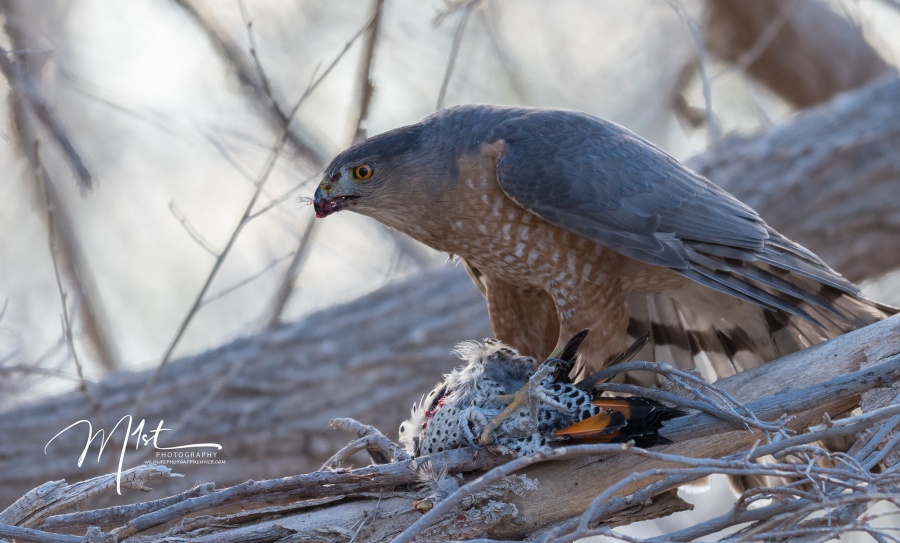 The circle of life was complete. 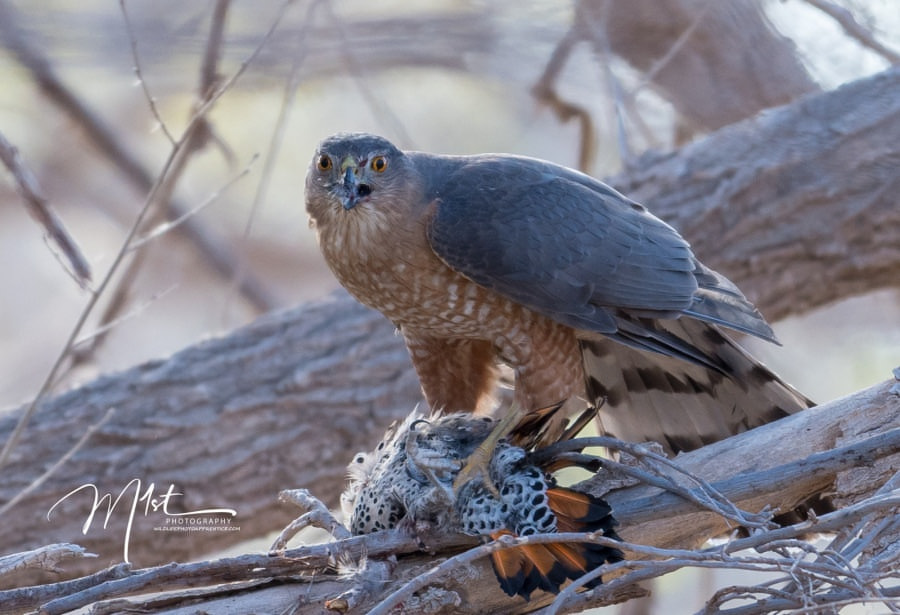