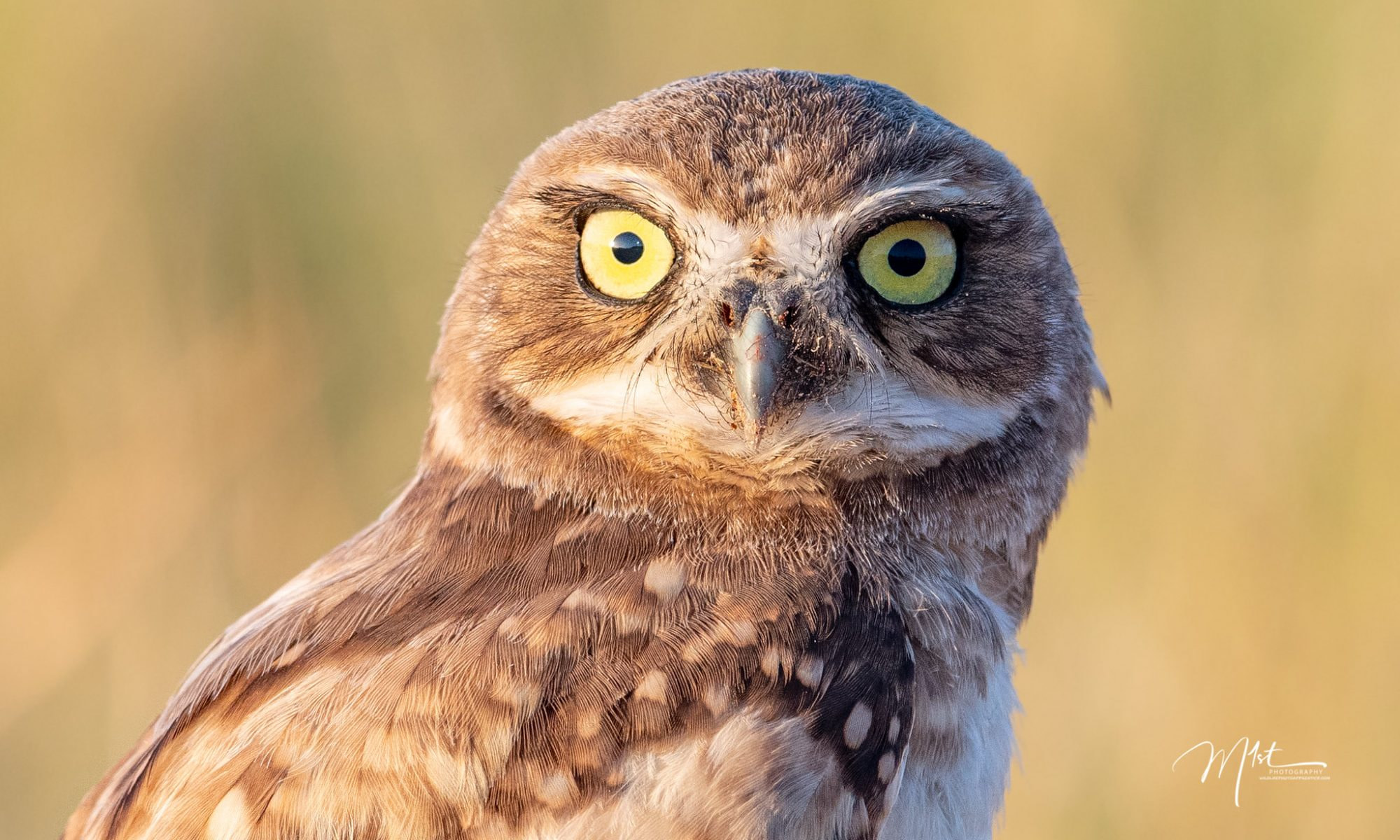 I think it was Humphry Bogart who said, “She had the kind of eyes you could get lost in”. I love to photograph owls for a lot of reasons but mostly because of their eyes. They have the kind of eyes you can get lost in. When beginning to photograph wildlife it’s important to understand that an animal’s eyes are the most important part of the composition of a wildlife photo. Because of their large prominent eyes, owls offer a great opportunity to practice this principle. Owls, however, are very reclusive nocturnal creatures for the most part which can make finding them and subsequently photographing them quite difficult. There is one species of owl however that is relatively easy to find and is active during the day. The Burrowing Owl. If you want to practice your wildlife photography and work with a subject that has great eyes, then burrowing owls are just the trick.

The burrowing owl is a small owl with long legs that are found throughout both North and South America. They prefer open grass or rangelands but can also be found in deserts and agricultural land. They nest and roost in burrows. Burrows are often excavated by other animals such as Prairie Dogs. If you find a Prairie Dog town then you will most likely find Burrowing Owls not far away. It is not unusual to find both in populated urban areas in the southwest United States. Grasshoppers, crickets, moths, and beetles are their main prey, but given the opportunity, they will also prey on mammals such as mice, voles, and shrews. Their long legs enable these owls to pursue quarry on foot as well as in flight. Burrowing owls will often bring dung to the entrance of their burrows to attract insects such as dung beetles to prey on.

As humans, we naturally make eye contact with other living things. In your wildlife photographs, the eyes complete this connection just as they do in real life. A large sharply focused eye engages the viewer, draws them into the photograph, and often elicits an emotional response from the viewer.

I am fortunate to live in Western Texas where both Prairie Dogs and Burrowing Owls are common. Not far from my house on a local college campus is a large Prairie Dog town with several colonies of owls. Both are fairly habituated to the presence of humans which makes for good photographic opportunities. Both are dynamic species and move to new areas as food sources get depleted. The owls somewhat follow the prairie dogs but maybe in abandoned burrows some distance from the active prairie dog town.

I prefer long prime lenses to photograph these small owls such as a 300mm f2.8 or a 600mm f4. Getting close and using a telephoto lens makes accentuating the eye easier. It is often possible to quietly approach the colony and set up somewhat close to them. While they may initially retreat to their burrows they often emerge minutes later to resume their activities with total disregard for your presence. In late spring and early summer owlets may be present in the burrows.

As mentioned previously, unlike more “typical” owls, Burrowing Owls are often active during the day. Still, they do most of their hunting from dusk until dawn, when they can use their night vision and acute hearing to great advantage. From a photography standpoint, the golden hours mesh perfectly with the owls hunting habits. By photographing during these times you can use the light to enhance the impact of the subject’s eyes in your wildlife photos. Photographing your subjects when the light is soft eliminates harsh shadows across the face of your subject. Early or late in the day, the sun is low and shadows are less of a problem.

Humans are inclined to look first at the eyes of a subject in a photograph and then to follow its gaze to where ever it leads them. By making sure the subject is facing toward the center of the photo the eyes of the subject can lead the viewer into or out of the picture. Use this to your advantage when composing the subject. For example, when your animal subject is on the right, try to catch it facing the opposite direction. When it comes to owls who can rotate their heads almost 360 degrees some interesting shots are possible.

If you want to work on your wildlife photography and the use of your subject’s eye in a photographic composition then locate a colony of burrowing owls. They’re fairly prevalent in the southern US and in most cases habituated to human presence. Their brilliant yellow eyes are captivating and easy to get lost in.