The local wildlife preserve has an unusually diverse flora and fauna given its size and location.  One mammal that is native to West Texas and the preserve and always a treat to see, is the Bobcat.  On most days I arrive just before sunrise in order to increase my chances of seeing one but today I was a bit later due to heavy fog.  Shortly after arriving, walking down the trail, I noticed movement and discovered a single mature Bobcat was ahead of me on the trail. 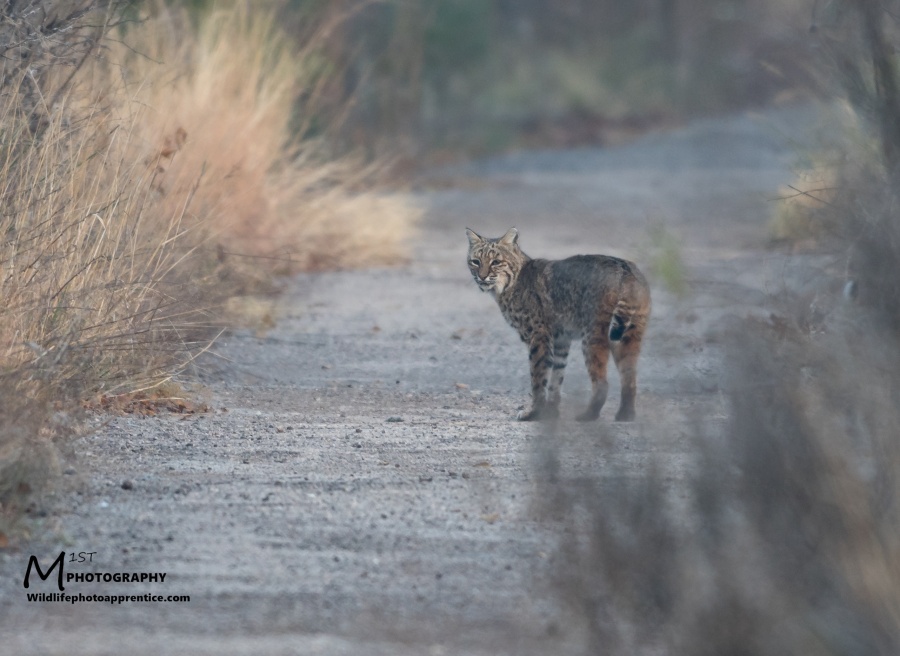 The most common wildcat in North America, the bobcat is named for its short, bobbed tail. They are medium-sized cats and are slightly smaller but similar in appearance to their cousin, the lynx. After taking several photos, a second  younger appearing Bobcat suddenly appeared.  The younger cat intently watched the brush at the side of the trail, as mom moved on. 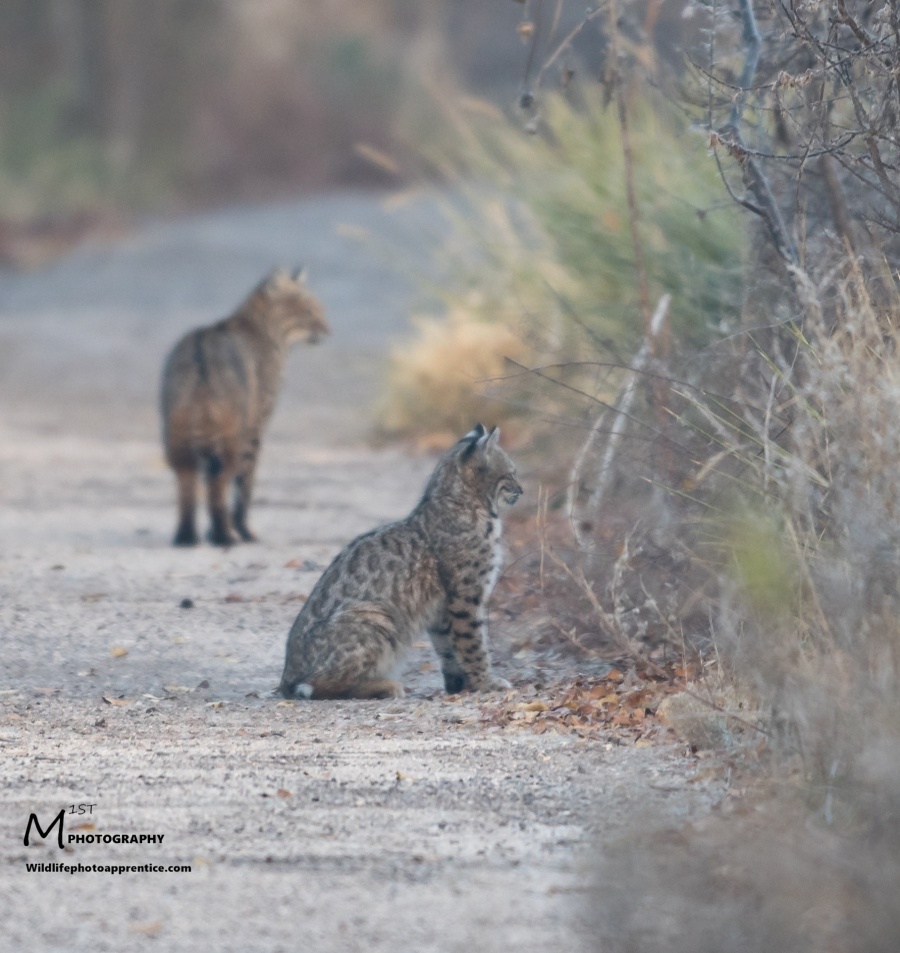 Bobcats coats vary in color from shades of beige to brown fur with spotted or lined markings in dark brown or black. They are elusive animals and are active mostly at night, however they can remain active for several hours after sunrise and prior to sunset.  After a few minutes the younger Bobcat slowly moved toward me continuing to watch something just out of view. 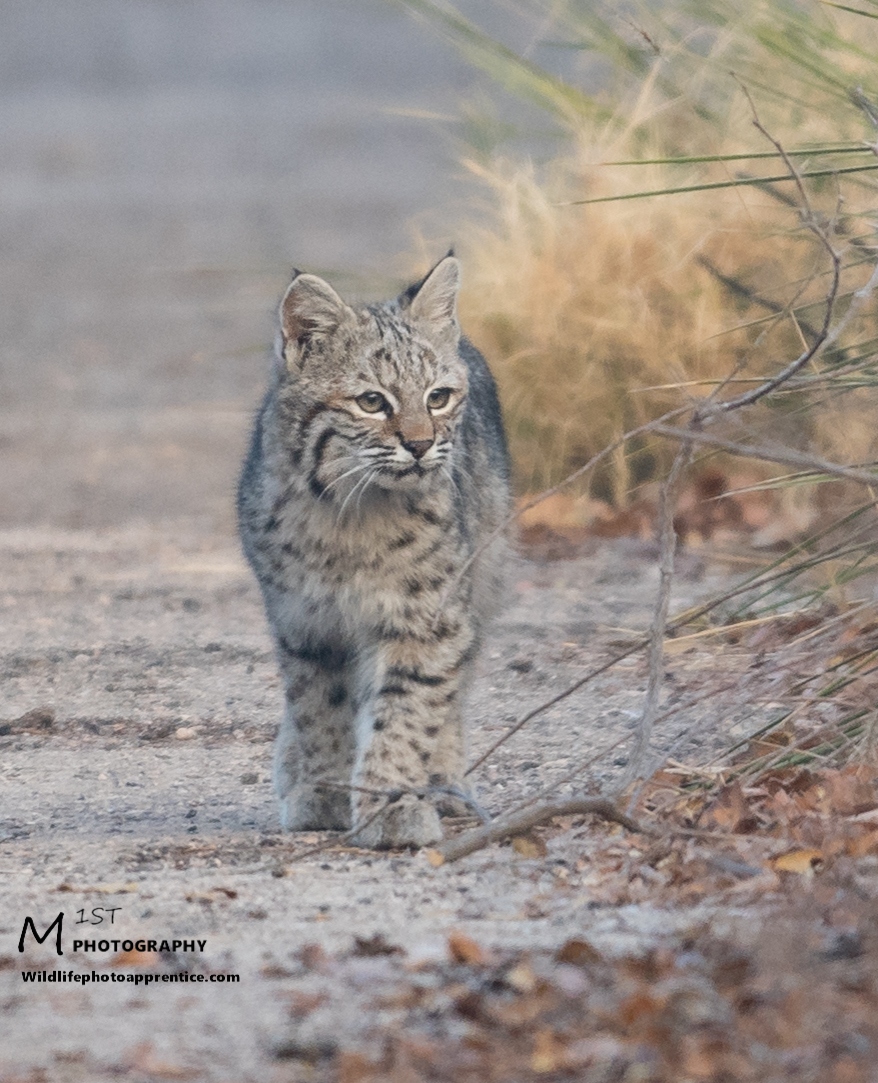 Soon it became apparent that she was watching her sibling who burst from the bushes ready to play. 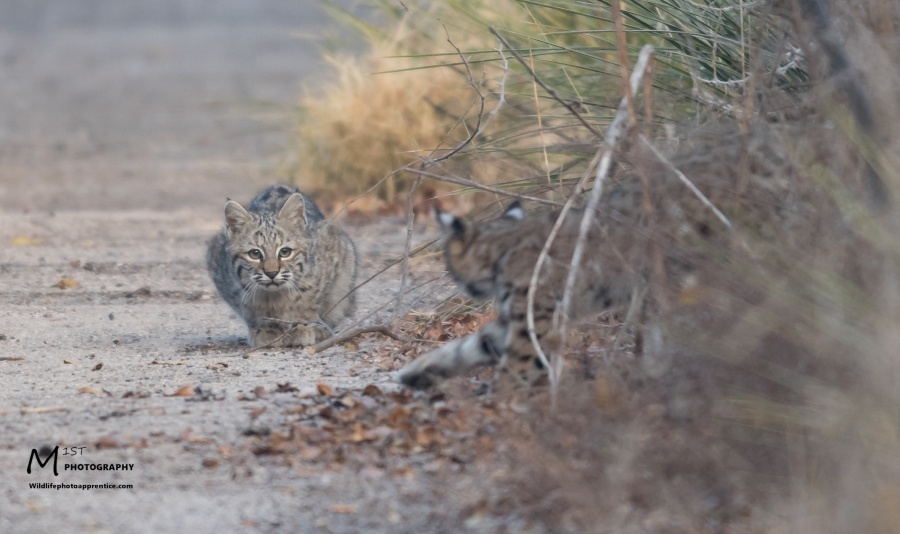 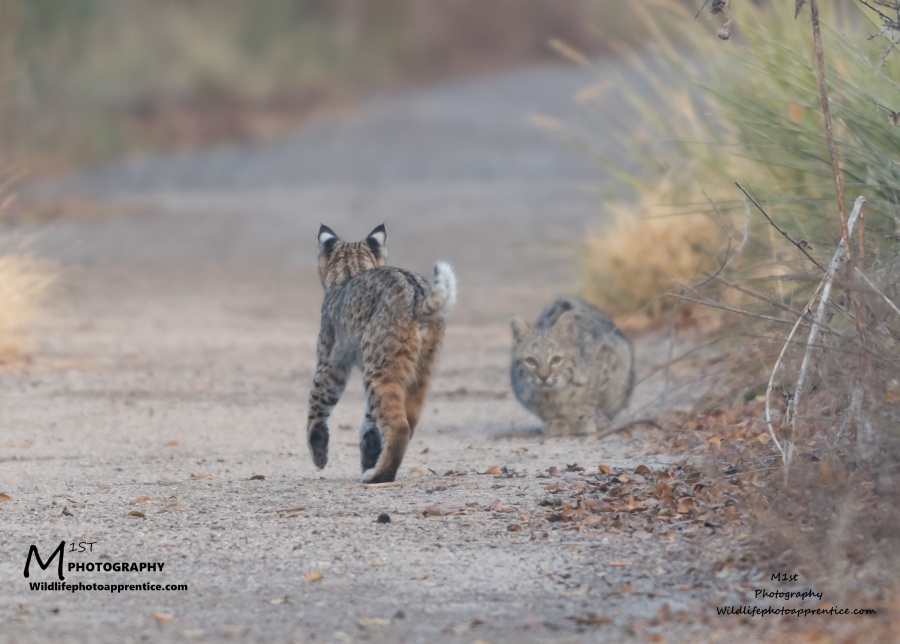 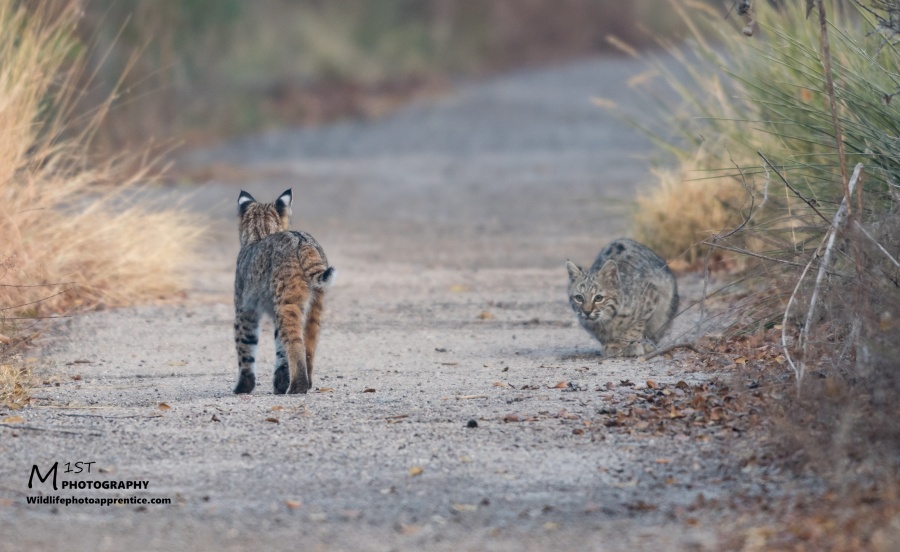 The two young cats played for several minutes unaware that their mother had moved on down the trail out of sight.   Suddenly their mother, impatient with her youngsters inattention, let out a scream and the two immediately responded and headed off down the trail to find her. 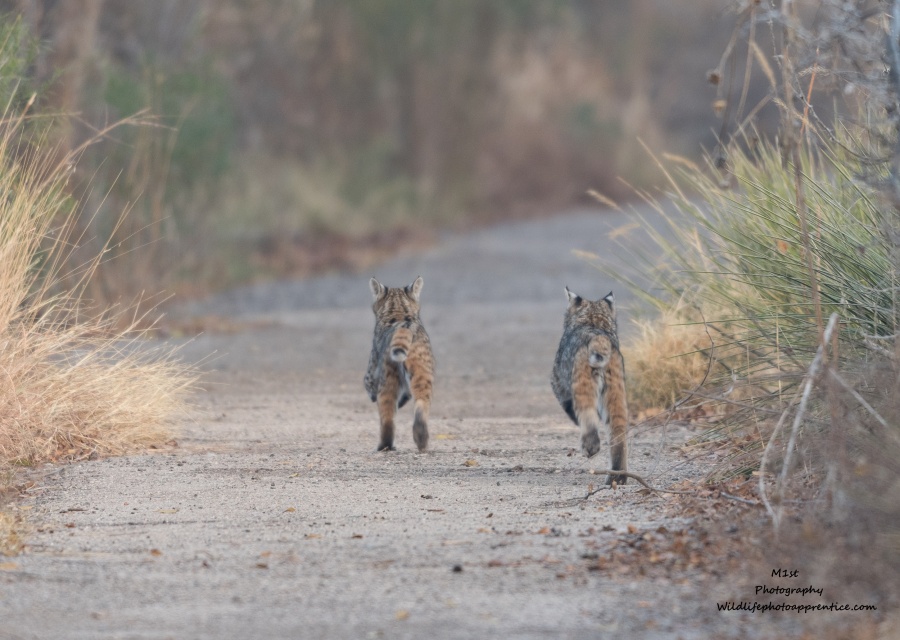 Bobcats mainly hunt rabbits and hares.  Bobcats are also known to eat rodents, birds, bats and even adult deer, which they usually consume during the winter months, as well as lambs, poultry and young pigs when a ranch is near.

Bobcat habitat varies widely from forest and mountainous areas to semi-desert and brush land. A habitat dense with vegetation and lots of prey is ideal. Bobcats are excellent hunters, stalking prey with stealth and patience, then capturing their meals with one great leap. 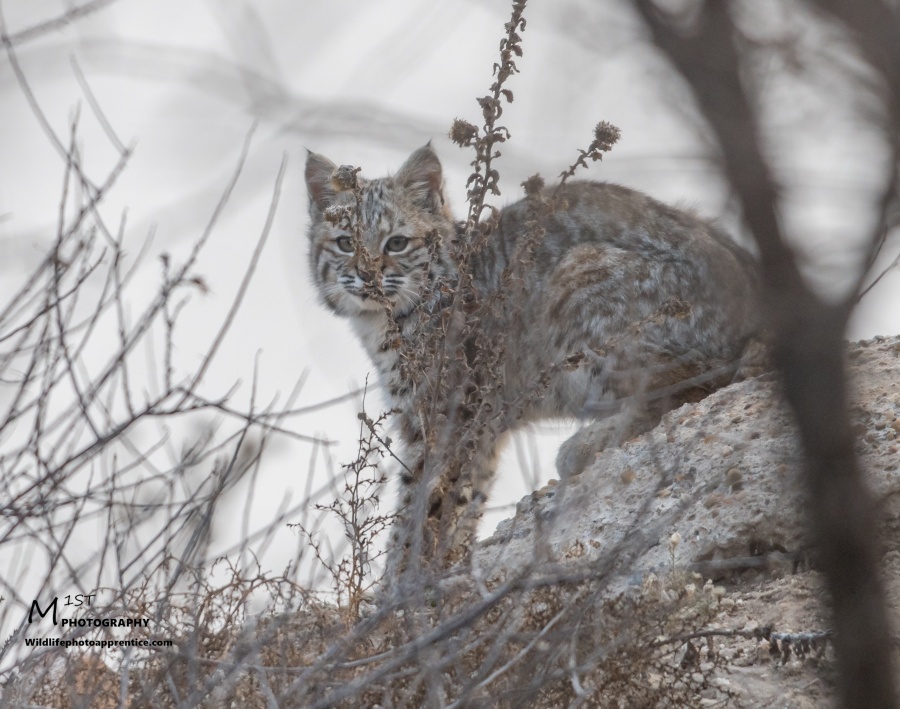 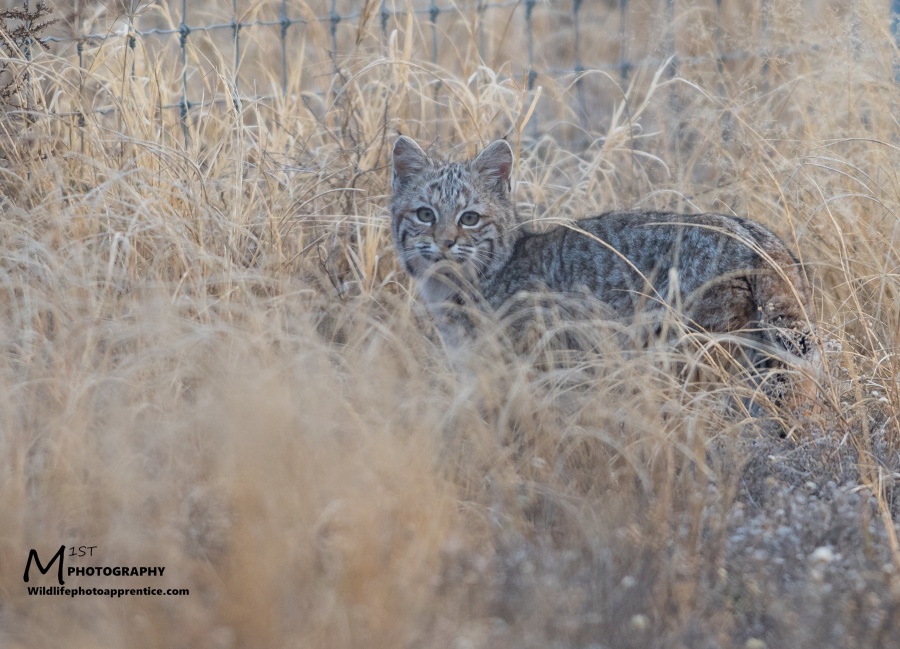 Dens: Each bobcat may have several dens, one main den and several auxiliary dens, in its territory.

Main Den: Usually a cave or rock shelter, but can be a hollow log, fallen tree, or some other protected place. (Also called the natal den).

Auxiliary Den:  Located in less-visited portions of the home range and are often brush piles, rock ledges or stumps. These are also called shelter dens.

Mating season: Late winter, but throughout the year is possible.

The kittens begin eating solid food at around two months and begin learning to hunt at 5 months. When they are between 8 and 11 months, the kittens are evicted from their mother’s territory. 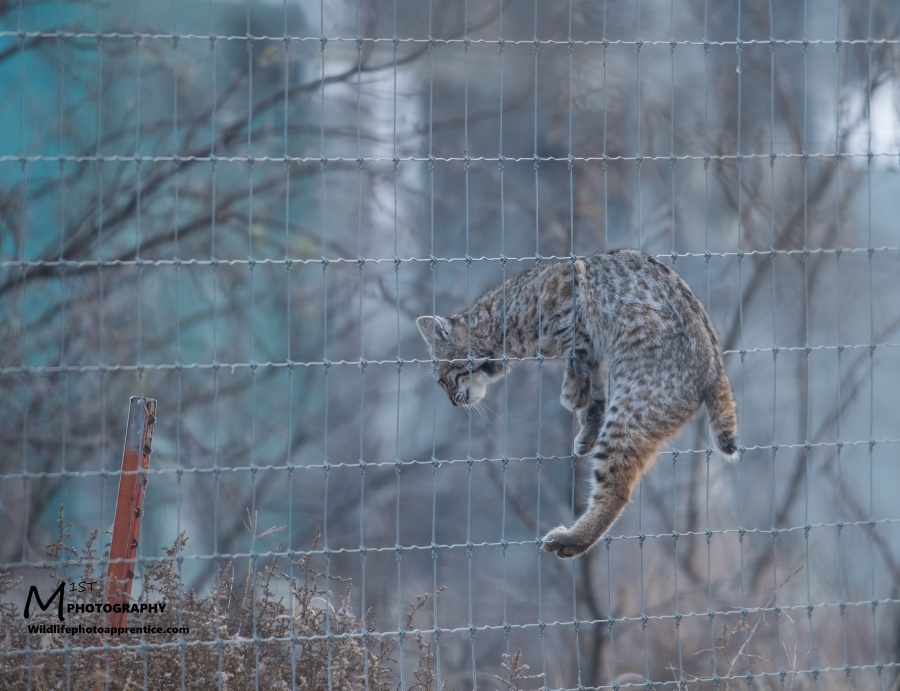